Recently the Warhammer World Facebook page was the forum for a 'ruling' on the use of Escalation and Stronghold Assault at their events. The question was asked very soon after the release of the two supplements, additions that at that point I really had no interest in. After a brief pause for the Events Team to get to grips with the rules themselves it seemed only one of the supplements would be in use, I forget which because pretty much as soon as it was mentioned that it was confirmed that both would be allowed.

Suddenly I actually have to take notice of these new rules. Escalation is pretty much a non starter, the only Lord of War available to Tyranids is a Harridan from Forgeworld and that is never going to be on my shopping list. So instead I have to turn my gaze to Stronghold Assault. Now this is something I can get behind, literally! The ability to take numerous fortifications, if only I had more than one... Oh, I do! An Aegis, Bastion and Skyshield... and even try and shoehorn my redundant Mycetic Spores as Vengeance Weapons Batteries!

There's plenty to think about and it doesn't end there because although the idea of 'fortifying' my Hive appeals, I'll still need to 'man' it with creatures and in January those options will be completely different. I'll continue to develop the buildings but I need to ensure I've actually got sufficient models to win against someone who doesn't turn up in Escalation mode, or those who turn up in Stronghold mode too. 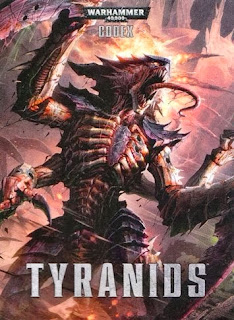 Ultimately I believe the choice of the the Events Team to take on board the supplements is the right thing. Warhammer World is GW HQ and they should showcase all the best that GW has to offer. I'm not sure how the mission setups will go but that's their problem to overcome, its a bold move

However, I do feel that those who invest in their army will be at a distinct advantage . At this moment in time I would not be able to face any Lord of War with my Tyranids, I'd struggle to do any damage whatsoever. The prospect of spending £62.50 on a ticket to an event where I may as well leave my models in their box doesn't appeal to me, and that's not including the money on travel and hotels too. This is my only reservation, Warhammer World is supposed to be fun, competitive but not at the expense of enjoyment. Including the supplements could end up like taking a knife to a gunfight. No one wants to be outclassed before turning up and those with lots of money to buy the big new shiny toys are at a distinct advantage.

I hope the atmosphere will still be the same and there won't be those who use the supplements as a route to win at all costs. I think the advantage with Stronghold is at least my options are defensive, I'm just hoping to stay alive and conveniently showcase all my Tyranid bio-architecture at the same time
Posted by 40kaddict at 12:12