Here's some more left over bits from my Epic collection. Bits that never got painted, used, built or are just plain interesting for their novelty value alone. Below you have another 5 Whirlwinds [which make 8 when you add them to this bunch]. Also there are 3 Mk1 Vindicators and a lead [pb] Rhino and his plastic counterpart. 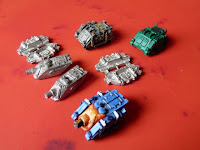 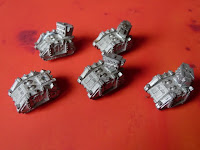 Next up a Barrage missile launcher for one of my Titans, a close-combat wrecking ball and a couple of the banner poles. I really miss the Titan aspect of 40k, maybe I should have tried to play this one day... 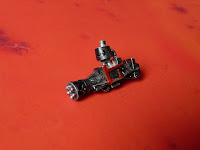 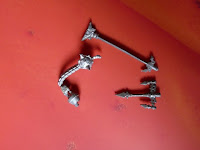 A sprue-load of Space Marines and Imperial Guard. At this stage I was painting them on the sprue as it was easiest. According to the rules because Space Marine Scouts weren't true Astartes they suggested IG models were appropriate so I think that's what I was going to do here. And also another 4 Dreadnoughts [to add to my existing squad]. 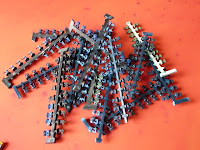 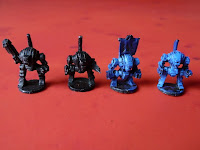 Not sure why I took this shot twice but there might be a reason when you click to zoom in [why doesn't blogger have that function built into the editor?]. Anyway some of the Epic lead [pb] Marines, including a Devastator. That used to be the 'treat' in any Epic blister purchase - the random marine or jetbike that would come with the pack. Takes you back to all those Adeptus Titanicus shots that were only made up of little lead [pb] men 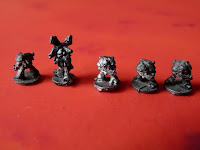 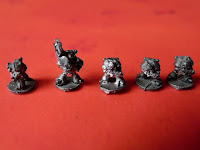 And they also did Eldar in lead [pb]! Here's a las-cannon weapons team. I had another but randomly decided to remove it's circular base. That's a lot of work using only nail clippers! Also three more Titan bases purely for the fact it begs the question 'just how many Titan's did I have?' if there's another 3 empty bases! 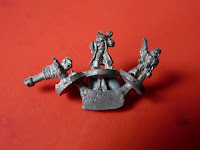 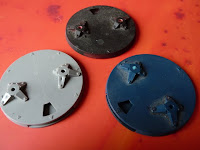