I'm not totally trying to spin out all these Titans for as long as I can, honest. Here's a couple more War Griffons. This is just a random load out of the painted weapons that I found in my bits box, however I had chopped the bottom mounting pegs off a habit I did on a lot of these so I clearly knew what I was going to do with them. With hindsight that's a mistake, for the sake of coolness I was abandonning flexibility? Sure at the time I had enough titans to never need any kind of flexibility - I could set them up however I wanted and just run them like that for ever...

Anyway, of note is the 'chaos' head with added Imperial Guard Sentinel feet... it's a close-combat head! Isn't that obvious? Well I clearly had a couple of pairs of leg spare from the carapace laser conversion seen previously. This was a cheap way to convert this into something a little bit more naff interesting [nah I'm not wholly convinced either]. 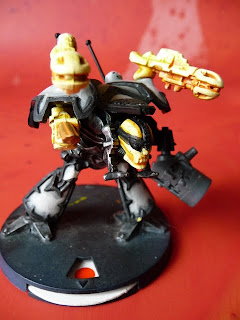 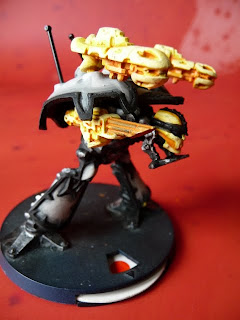 From my earliest Adeptus Titanicus days I think this was my favorite load. My memory may be cloudy but they were 'gattling blasters' on the arms and Defence Lasers on the carapace. This had a phenomenal rate of fire for taking down void shields at a decent distance and then the lasers punched through the exposed armour to cause maximum damage. Also there's the Command head. I loved this replacement head however in the left picture you can see there's a door for the crew to get out and walk round the jaw 'battlements'. I never liked that so I acutally filled in the gaps with Milliput, which is why they go all the way up to the head. It looks cooler, but again with hindsight I'm not so sure I've taken just a little bit of common sense from the design? 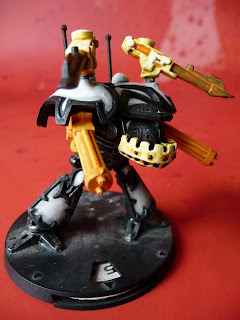 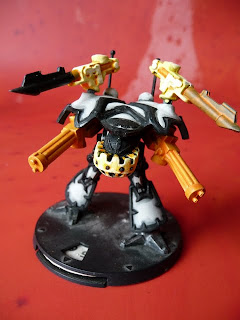