Finally digging out the remainder of my unfinished War Griffons Titans. As you can see below there were plenty of bits they bought for Epic, there's even a few more that I haven't photographed. I've since put the Reaver in a nice bath of Dettol  and will strip it down to repaint because I think it's had three coats of paint in it's life and it could do with starting from scratch. It amazes me that this costs £20.50 brand new from GW today. Maybe I should just ebay it instead ;) 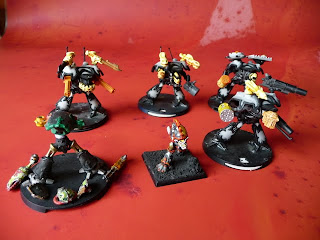 I'm going to split up some of the titans as the interesting extras should be suffiicent for a few posts at least. Sorry if you think it's spreading the content a bit thin but I'll only end up with a massive post otherwise and will be floundering for inspiration a month down the line.
This titan features the head mounted barrage cannon [the exact name escapes me]. It was also designed with the fire control tower on the left, which had some benefits [again I forget what] and the Landspeeder landing pad on the right. This allowed an attached Landspeeder to scout ahead and you could use it's line of sight for targetting. When you factor in their ability to 'pop-up' that's kind of a cool trick for a titan that's going to camp out backfield and barrage things from safety. As you can see I used a lead [pb] Epic marine jetbike for my attached Landspeeder, which I think is cool.
The multi-launcher and close combat chainsaw were probably not on my load out list. Maybe the multi-launcher, perhaps a second one would have been cool for total barrage devastation. 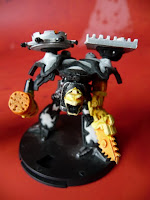 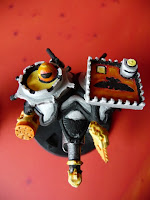 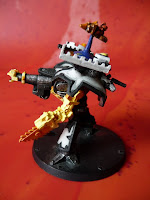 Here you can catch some more of my  lead [pb] Landspeeders, I think I've another knocking around to make a full squad, hence the common sense use of the jetbike for the spotter role. The middle shot also shows the other addition to the titan, 'carapace weapon mounts'. These are small guns mounted to the banner points on the back of the titan so any attacks from the rear are covered. Not sure my logic is sound on this as if the titan is backfield there may not be a whole lot of attacks from behind but cutting a couple of Imperial Guard Sentinel war walkers down looked a lot better than the actual tiny little multi-laser accessories they made. I think the last shot is the most imposing, though I'm still not convinced that fire control tower is going to offer any adavantage over visibility than a conventially mounted head... 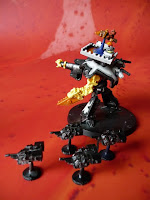 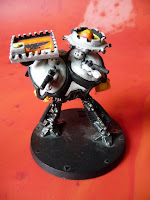 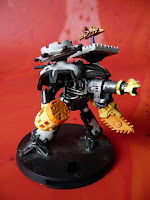