Having had my 'busman's holiday' with the display base I've returned to the Hierophant. That's not through want of trying to crack on with the other two parts of the 'Big 3'. I tried a of metallics on the Armigers, got as far as Balthasar gold on the carapace, then started on the legs and literally refused to carry on! What is it with my bronze that I now can't even stand painting it? So it was back to the monster. 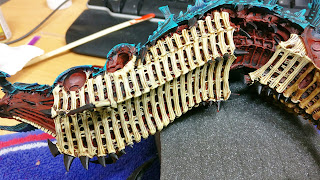 Army painter Skeleton Bone was my weapon of choice, because it's slightly darker. When I started the nids way back when I'd have considered highlighting the ribs as a single entity. Obviously I now do it with 'pinstripes' to add more texture. Once again it makes the silhouette of the rib busier but I'm going all in on this now. I'm not sure the quality has ramped up but the effort certainly has - no shortcuts here. 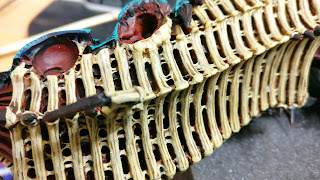 Right hand side was session 2 and from a distance my pinstripe striations look pretty cool. I might have liked more variety in them rather than the three stripes per rib but the line and paint thickness isn't particularly uniform, even if the amount is. 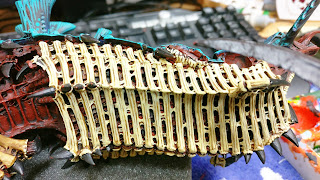 Once again I'm not sure it stands up to close scrutiny - the brush strokes are far from tidy but I'm confident further highlights will create more definition that will justify the imperfect nature of the bioform - it'll all make sense in the end. 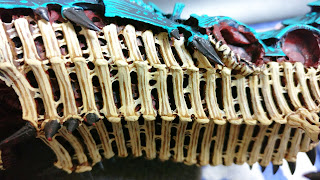 I think I still managed to retain some of the underlying tones from the bone and washes, maybe not as much as I'd hoped but possibly more than I would normally. 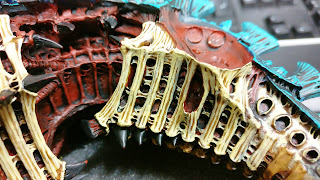 Tail and guns followed by front and back legs - roughly 3 to 4 sessions I'm guessing but it feels like it's progressing really well ☺
Posted by 40kaddict at 12:10