Dear readers, you will recall how well the Bonewhite highlights were progressing and how pleased I was with myself. Now they say 'pride comes before a fall', this might be evidence of that. I estimated I'd be able to get through this big leg in one sitting, I was clearly very wrong. I managed to do most of the edge highlights but when it came to the pinstripes I could only manage the lower third and even then I wasn't overly happy with the result. 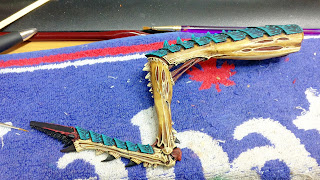 This pretty much felt like my momentum was killed dead. I know going forward to approach the other legs in the same way - edge highlight and then fill in. That's why the ribs were so easy to do, each element was conatined, whereas here there's just so much space that I need to section so I can deal with on a smaller basis. Funnily enough the original plan was to paint the legs first, I don't know why I didn't but I'm extremely grateful for deciding to paint the ribs first. Without that under my belt I may well have felt even more disheartened. 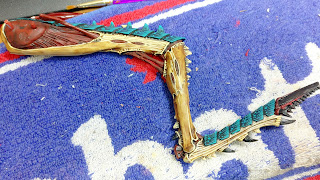 With the legs giving me grief I thought I'd flip everything on its head and think smaller again - focussing on the bio- cannon arms. 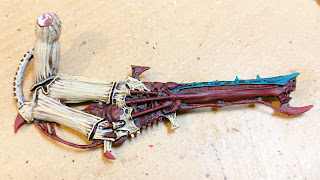 Despite them being the smallest of it's limbs with the least bone it was a full hour to do all this and a surprising amonut of Skeleton Bone paint that I now worry is running out. 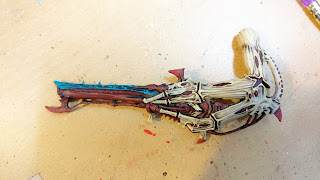 I used what was left on my palette to do this bit on the right arm. For a variety of reasons [that I'll list below] I'll put this on hold at this point. As the Skeleton Bone is running out I don't expect to replace it until Double Trouble 3, when I can nip into Element Games directly. I've probably got far more than I think but this gives me an opportunity to try and tackle something else in my Big 3. 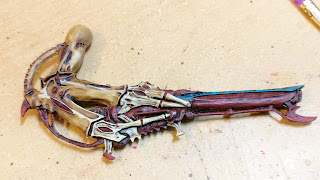 Despite my utter aversion to the bronze on the Armigers I took the opportunity to force myself to overcome the issue. The Manchester GW is holding an Imperial Knight World Record attempt - the most Knights in a store, and Armigers are included. Unfortunately the event is on 'the day of release of the new Imperial Knight Codex', which I estimate could be between 2-4 weeks maximum. I honestly don't think that's achievable, certainly not the two week deadline. I can but try and even if I miss the deadline I should have progressed sufficiently that I'll feel happy about their state, they may even be good enough to join in unfinished... Regardless, expect Armigers next on the blog.
Posted by 40kaddict at 12:12