'nids part 252 - Biotitan Tyranid Hierophant pt.7 - Chitin highlights on the tail and 2nd half of the body

I managed to get really focused to complete the final 19 chitin plates on the tail of the Hierophant. I honestly didn't think I'd do it but perseverance will out! It also helps they get progressively smaller as they go down the tail ;) 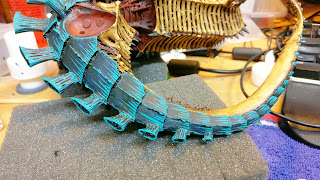 Vents also got done, well this side at least. 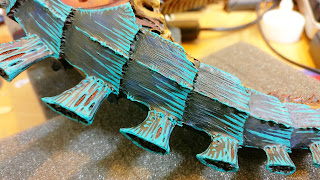 The striations still bother me as they're pretty chunky, especially on the smaller plates but then I remember these are first highlights and [even] if I could do them finer they'll be most likely covered up by second highlights anyway! 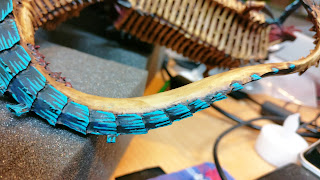 This is two nights on. Session 1 I did the left side of the head, mandible and two neck plates. Given how disappointed I was when I did this first time around I was quite chuffed as I felt I was 'to schedule'. What I seemed to ignore was I possibly did the 4th bigger shoulder plate too in that session, so I was actually behind schedule :( However, I didn't realise it at the time and so cracked on during session 2. So I was already a plate down and only managed half a big dorsal vent but I did do three plates and all the cysts. So a little behind still but it's still progressing. 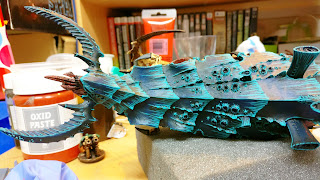 And then last night's session - three of the biggest plates on the model and a few of the vents. I'm obviously still behind, this may end up taking a couple more sessions to finish up but I'll no doubt throw in the spots onto that second session and then first pass of highlights will be done. 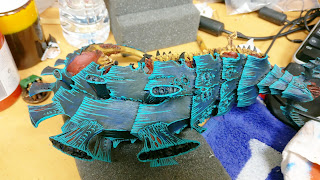 Of course when I do the spots I'll also have to do the legs as well which might end up longer than 2 sessions, who knows. There's a bit of tediousness about this at the moment but thankfully I'm relaly motivated, at least getting these highlights complete before I flit off to do something else...

... which is lies! Because I've actually been multi-tasking this with another project at the same time. No, not the Armigers... nor the Razorback... even the Fire Firs haven't been touched. No what I have been doing is building my Sanctum Imperialis from the Renegade box set. Yeah! What the flip is that all about?! Anyway, I'll have some Big Build To Done! pics from that soon.