Yet more 'highlights', I'm going to stop apologising for this now, it's a big model, there's only so much I can do so it's going to take a while and that means a lot of posts might not cover a huge amount of progress or highlight the same old process yet again. So lets just crack on...  I confess, although I had done some hard graft and fairly decent, consistent, highlights so far the model was a little underwhelming. Now I think Ive gone a little 'Liberace' on it. The spots and dots have been a key feature on my colour scheme since I first started. 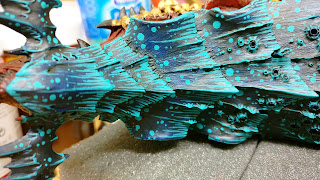 Their primary function is as an 'interference pattern' to break up the expanse of blue on each plate. Given the amount I once again adopted my three sizes of cocktail sticks to create small medium and large dots without wrecking my brush and creating consistent circles each time. I may have gone OTT but they definitely achieve their function, as you can see below. 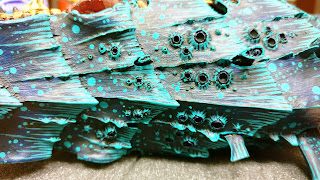 I'm a little dubious regarding the big circles. When you use the cocktail stick it does tend to make dots bigger than it's diammeter, thanks to the amount of paint you pick up. That siad this is as big a model as it gets and I was happy with that dot size on my Bastion/Skyshield/Defence Lines so I'm not going to worry too much about it. 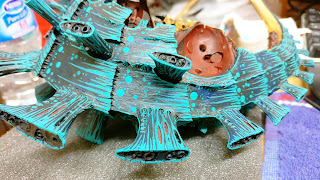 I managed to do the entire body, legs and guns were limbs too far. I'm confident this is now better than it was and will look awesome but I accept it is way OTT, but as a centrepiece model it's supposed to be. I've actually seen a fair few Hierophants painted recently, very simply and I feel a bit sad folk didn't go all out on it. 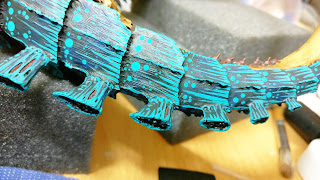 I will at least know I gave it my all when it's done. Next up are its limbs, as mentioned above and then I may do an updated built photoshoot before I do the first set of bonewhite highlights. I want to do this in even stages rather than take the chitin through to finished and then play catch up elsewhere. 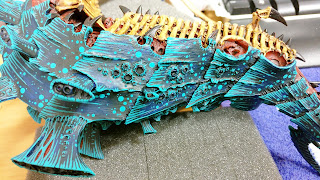 It's interesting that all the claws and spikes that have been painted black are already showing signs of wear due to all the handling this model takes to get it painted - that piece of foam comes in handy for resting it up and support. The rubber gloves help a bit too, but then they get snagged on a spike. Anyway, see you next week and I may have those 'built' pictures ready.
Posted by 40kaddict at 12:30