I last covered these in the middle of April but not sure if I shared these two pics, at least they're not in the last post but appear afterwards in my photo album. 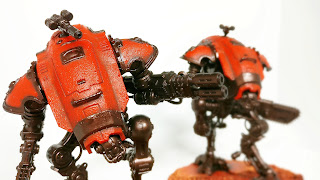 Anyway, as I push to try and meet the unknown deadline of the release of the new Knight Codex it's a decent place to remind you where I was at. I then went with some Balthasar Gold on the Warplock Bronze, but as reported had to stop partway through as I physically and mentally couldn't deal with it. 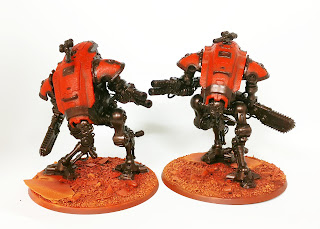 Thankfully, my recent 'girding of loins' finished off the Balthasar highlights, then Retributor Gold the following night and Runelord Brass the night after. Something is up with my Runelord Brass though, it's very gloopy, doesn't drybrush at all well and stippling is rubbish. 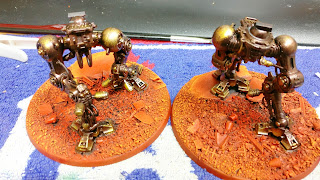 Nevermind, they'll all be getting washes next and having done it this way I can sepia wash the entire model, Vermilion too, all at once. I've picked out the chainblades in orange but they'll be yellow and black striped, so yellow next before the sepia for the antique tone and shading. Then I'll be washing Strong Tone in the deeper recess for contrast and definition. 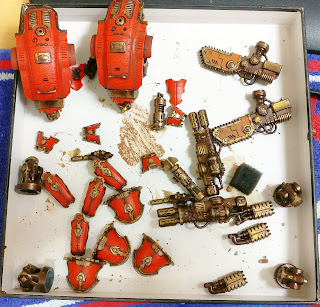 While I thought about the washes I realised there was no reason not to have the foot and thigh plates on. I'd perhaps been debating even adding them, I'm not a fan of the 'spats' but without them the thigh plates look too muscular. So it was all or nothing and I stuck them on so the decision was made. 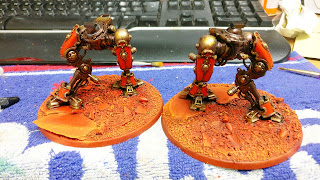 I might differentiate some of the panels - yellow and black stripes, white or black panels for heraldry and to tie in with my Cerastus. With all the 'actual' painting left to do, and the weathering and battle damage it's an awful lot but these few nights progress have felt really productive, but I'm not about to count my chickens like I did with the Hierophant!
Posted by 40kaddict at 12:10