Terrain is everything - Sanctum Imperialis Big Build TO DONE!

After my last Confession I'd assessed what was on my palette and distilled it down to the 'Big 3' which begs the question why I was suddenly building the Sanctum Imperialis from my Imperial Knight Renegade set... In fact, on the sprue this took up far less room but I suddenly had the urge to sacrifice valuable time on the Heirophant to finish this off. 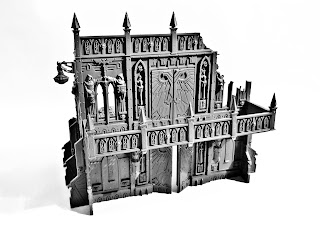 Now I made some choices about construction, to get as much out of it as possible and match up with the smaller pieces of it I already own. However, despite not looking at the instructions or the pictures I've made an almost stock version of it, the main difference being it has the walls on both sides, instead of the front wall leading to ruins. 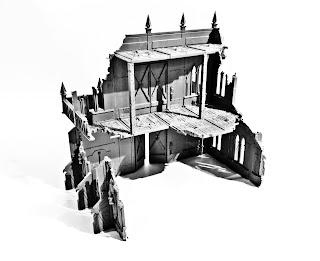 The balcony is also twice as big, running the entire width of the buidling. I used 'granny grating' to extend the balcony, which meant gluing was a challenge. I used Super Glue Gel, to bond it to the sprue 'cantilever' supports and various bits of cable ties to support it underneath. it should be sufficient for the load of a few figures. And the grating allows light to pass through unerneath - no shelter from the caustic rains of Ferron Proxima but it does look pretty. 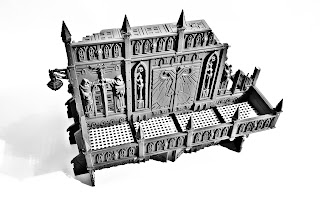 Side views, so that you can see how wonky the balcony is - no plumb lines in the 40k universe - it's heresy!

So I do get a Big Build Big Gamboge Stamp of Approval, it was even on my Big Build list! Regardless I need to see how quick I can actually paint this and it's siblings...