Terrain is everything - New display board - 'bloody marbleous'

I really didn't expect to progress so quickly with my new display board but I had a puncture last week which meant I had to take a day off to get it replaced. This afforded me some time during the day to work on the board. In the hobby for me, some jobs are 'day jobs' and some jobs are 'night jobs'; for instance painting the Heirophant is not something I can do during the day, it requires far too much patience and focus. But my new display board is definitely a day job, something I can fit in if I can snatch a few minutes. Considering my hobby time is supposed to be at night that makes the situation both challenging and rewarding when I get stuff done in the day. Seizing the opportunity I mixed up some black and Vermilion and sponged on the resulting brown to break up the previous Vermilion layer. 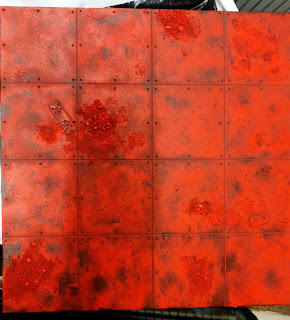 I then shaded all the cracks between panels. I did plan to paint Bonewhite mortar down the centre, I was amused by the concept that the Imperium would be collecting the Wraithbone shards across Ferron Proxima, grinding it up and then using it just as 'glue' to stick stone slabs together. The utter arrogance and ignorance for the revered Aeldari substance tickled me no end. 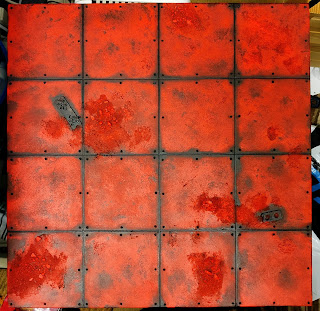 However, I wasn't sure it would look right, so for the time being I stuck with the shadow. Unfortunately my pics don't quite do justice to the gamut of colours applied so far.

Even so there was another set of highlights here, possibly Vermilion again, just to knock back the brown a bit. Towards the end of this project I may well have wished I'd stopped here but I went on with my next step regardless. 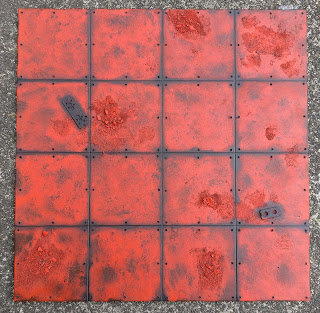 I then did my Red Planet BASE! effect on the Ferron sand bits, although I admit it looks more Orange Planet BASE! than red, but that had to happen to make it stand out against the Rockcrete. I also applied extra orange highlights to the slabs for yet more texture/depth. 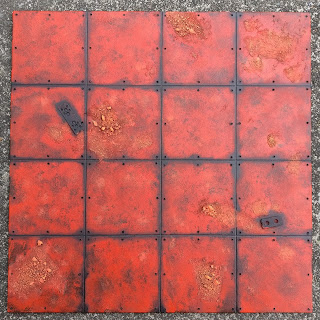 If you hadn't guessed already here's where my intent is revealed. I'm going all out and recreating my Dark Angel Jetfighter/Dark Talon red marble. Now I'm not certain this was the original plan but as I progressed I thought why the hell not? However, at this stage I was thinking I'd made quite the mistake as the bonewhite veins had been supplemented with a dragging sponge across in places for fine scuffs and bone scratches. I mean it's not unpleasant but it was über busy, much lighter overall  and I was seriously regretting doing it. I then tried to mitigate the starkness of the veins by another light sponging with Vermilion but the decider would be the shading step, which was up next. 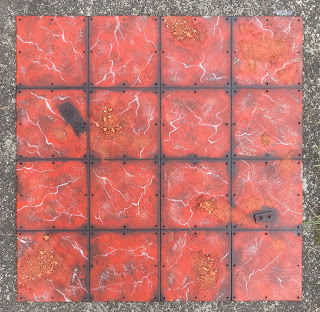 Resulting in this... now I'm, a lot happier with that finish. It's still ridiculously OTT, even more so than the previous step, but it does look considerably better - more deliberate, controlled and better executed. The big question is - should a display base overshadow the figures you but on it? I'm not sure there is a correct answer either way. I think I was similarly worried with the amount of bonewhite spots I did on my Realm of Battle and AoP boards but observed once you put your army on it covers up 75% of the boards anyway. So hopefully adding my figures, that will match up with the Red Planet BASE! effect on the Ferron sand bits, will break up the marble even more. 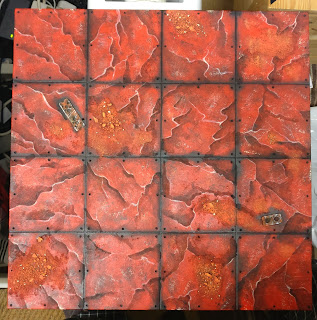 But everyone comments on my Dark Talon's wings and this is just as good an execution. In actual fact it has a life beyond Double Trouble 3 and will form the base for my Armies on Parade board at Southport this year. the plan for that display does not require anything bigger than this board so it will be perfect. 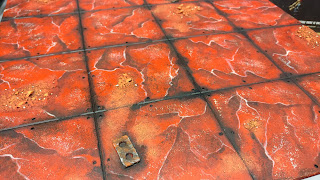 From the first picture above to the last this was done in one day, including the metal debris. I varnished it last night so it is fundamentally finished but I will obviously have to do a TO DONE! photoshoot. I may just add some yellow flock inbetween some of the slabs - pernicious weeds always find a way. Other than that I've ticked it off my list - the AoP board, even if it was not the complete 2'x2' board I had originally planned for that task, but the concept is still in the bank. Now I just need to do a backdrop [not neccessarily for DT3] and if I can eventually get the Sanctum Imperialis done that would be even cooler! What do you think, should I have stopped before the veins or did I do right to go all whistles and bells on it?