The Knight has had all it's panels highlighted, this is pre-glaze which has helped to sooth out some of the transitions. I also decided to fill in the black chevrons which has definitely helped me feel happier about them and the rest of the colour scheme. I also added some highlights to the yellow stripes too. I'd only had Mecharius orange on there with a sepia wash and it somehow looked yellow so I didn't want to go extreme highlight. This is just Tau Sept Ochre [still rocking those Foundation paints!]. I regret not having the texture of the red panels but I did paint the stripes a little roughly so although they're not even stippled or textured there is an illusion that the paint has not gone on smoothly 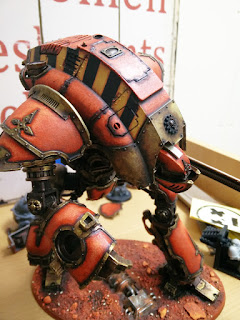 I also painted the pipework on his legs orange, ahead of painting more chevron stripes on it. As mentioned previously I now have to decide on picking out other pipe details. Its a weird thing because I have to choose now as there are chest plates to add later and I won't be able to pick some of them out when they're in place. Which begs the question do I need to do them? If I can't get in there to paint them and they'll be obscured is it worth sweating over what I need to do and doing it? 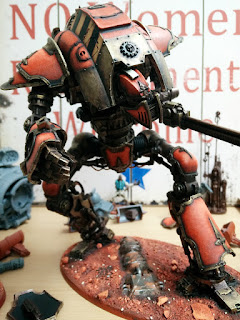 Like I say, too much time in my own head.