The low down:
I had my Devastators in my Bastion, this time with an armorium cherub [the Watcher] which I never actually used. 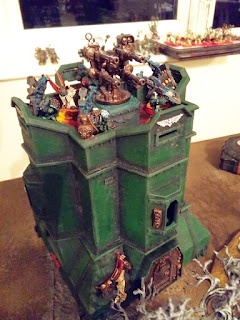 I had Ezexiel taking cover in the wrecked Rhino from the blasted copse, we 'Forged the Narrative' that the Orks had blown up the tank prior to the game starting and the squad were abotu to leave it's confines. The Cerastus had the lead, in front of the other Combat Squad and the scouts while the Plasma Cannon Tactical squad held the sacred shrine. There was only 7 in this squad as I had to drop a couple of member to fit the Cerastus in. One unit of Deathwing and the Techmarine were int he Land Raider the others were dee striking. 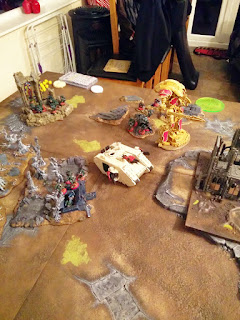 Ben's set up, this time with a fair few tank busters. 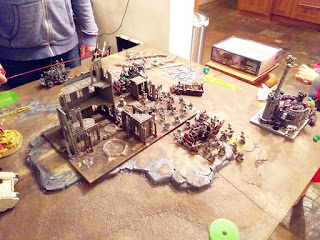 I was able to wreck one of the Trukks thanks to the Devastators Missile Launchers but then was unable to use the Quad Gun because the target was no more. First strike to me. 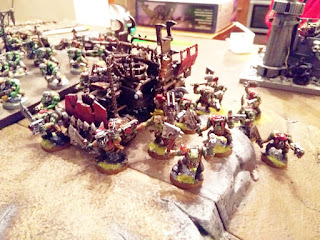 Big Shootas managed to get some good field of fire from their vantage points but I'm not sure they did much damage in their first turn [certainly no First Strike] thanks to stupidly good cover saves helped by Ezekiel casting Shrouding and night fighting too. I think the Knight may have taken a Hull Point or two though. 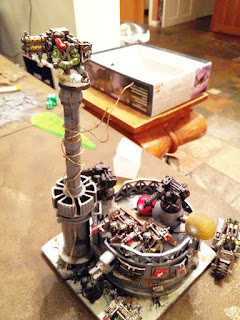 My turn two and the Deathwing arrive and shoot up the back of one of the trukks but not sufficient to wreck it. Ezekiel leapt from cover and raced up behind the Land raider hoping to get in range for Psychic Scream, which he did but couldn't hit! 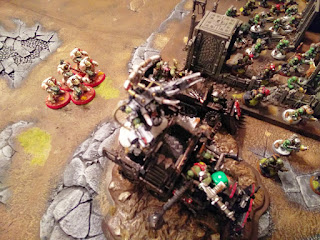 The Painboys trukk had come down my left flank and the Scouts had not alternative but to assault. They were going to die in the Ork turn with only overwatch to reward their sacrifice, so I may as well assault and get twice my attacks at a better 'to hit' roll. Sadly they failed to do anything more than perhaps 1 wound and were promptly slaughtered. 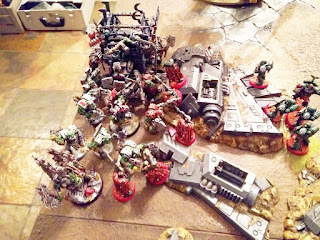 My disembarked Terminators shot up the Orks nearest so I no longer could meet my charge roll. I also kept the Techmarine with them. which in Ben's turn I realised was a mistake as he could have trekked over to the Knight and tried to fix his Hull Points. I think the Knight was able to wreck Ghazgkhull's trukk though, but it may have taken far more fire than it should have done. 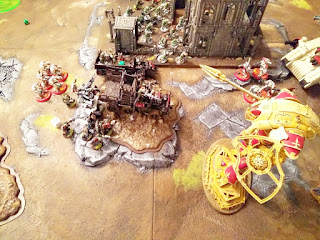 With their ride imobilised the Tank Busters set forth with a couple of Bomb Squigs adding a Hull Point or two to the Knight. 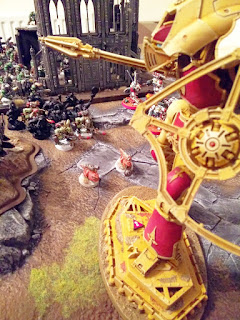 The Dakkajet turned up but I'm not sure he was particularly effective. 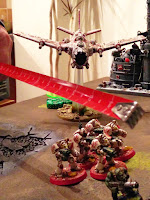 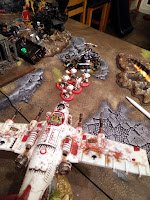 Which was irrelevant really as Ghazgkhull was bearing down on them. 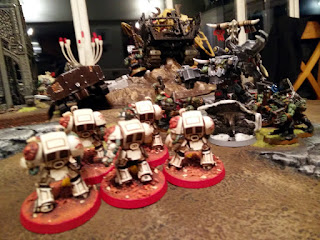 Things were not going to end well. 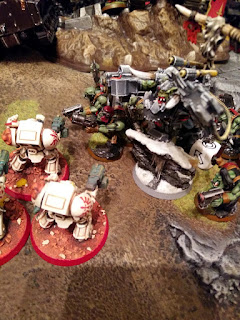 Kommandos turned up and I immediately remembered their burners and just how useless that bolstered 3+ cover really was. 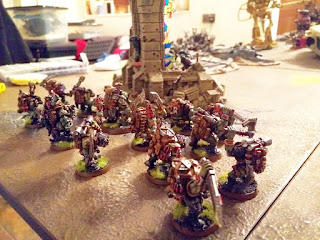 But there was still plenty going on in the middle of the board. 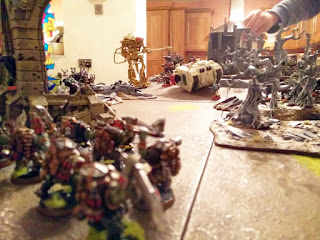 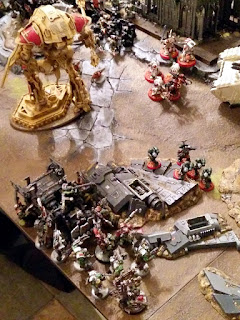 The get into Kombat and wreck face. 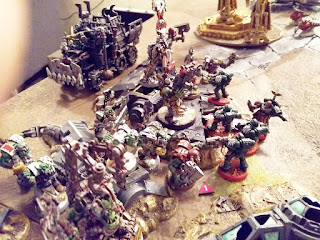 It seems the Dark Angels were sporting some Apprentice-crafted armour! So the four marines were chopped up with hardly a wound in return. 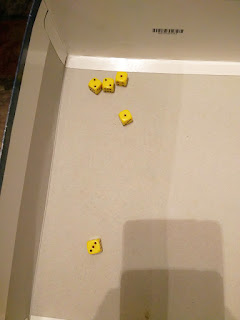 Orks consolidated onto the crashed Aquila. 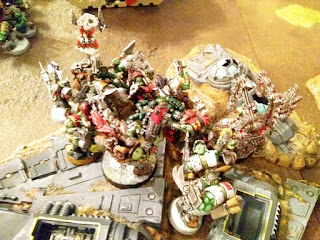 Ghazgkhull got into combat having shot three of the Terminators. It's one thing to have a full compliment of Deathwing in that assault but just three was never going to hold up against the Orks. 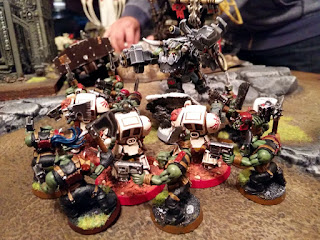 The Knight was charged by the Tank Busters who managed to get another 2 Hull Points on him through various means. 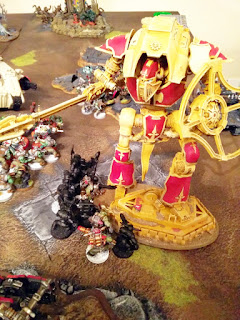 My other Deathwing were surrounded also with one Terminator being lost before the charge. The Techmarine was trapped in the assault too 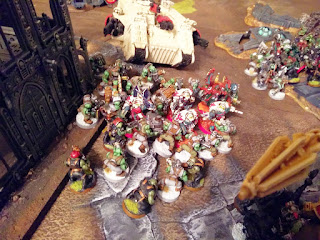 Ghazgkhull finishes the Deathwing off with ease and moves back up the field. 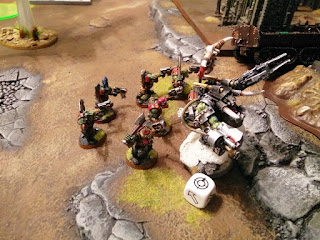 The Tank Busters blow the Knight up which takes out all but two of their number. 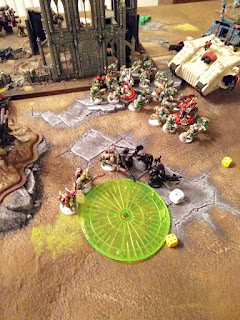 With most everyone dead I decided to call it. 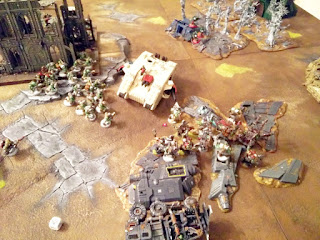 Even with a Knight I feel utterly out-classed with the Dark Angels. I'm not sure if it's early days getting to know them, the fact I have units that are sub-optimal, the wrong tactics or a tough opponent going up against hordes. Bottom line is that although this was a fun game, and we had a right old laugh, the fact it suddenly fell apart so spectacularly was not fun and the army is just painful to use at the moment.

Therefore, I cannot anticipate with any joy taking this current army list to BWX. Sure it's a 'non-competitive' tournament so sub-optimal is fine but if it needs to be sub-optimal it will have to look cool and right now it's neither. So, following this I've abandoned the Dangles for BWX, it will be nids again. I'm hoping to try a different list with more Monstrous Creatures but we'll have to see.
Posted by 40kaddict at 13:05