I'm actually not 100% sure what this stage represents, I think this is post sepia wash and if I'm honest perhaps should have stopped here. 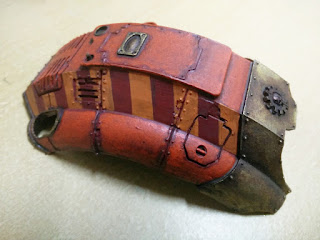 However, I carried on with my standard recipe of a Devlan wash after the sepia wash 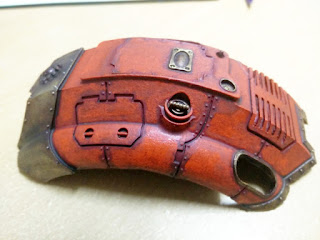 And pretty much removed the transition between Khorne Red and Vermillion. This panel shading is a bit to harsh for my liking but I'm reluctant to do anything with it. 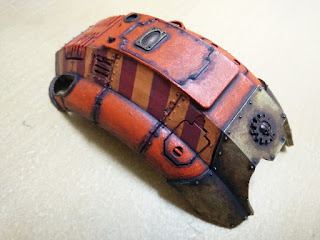 I don't think it's wrong, just a bit OTT. Perhaps a bit of variety might have helped, not just darkening every panel to the same degree 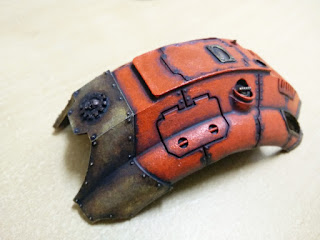 Anyway, not too much to show, it's slow progress because as much as I love the man cave, as predicted, it requires a certain motivation to nip out, usually around 10-10:30pm and then it's only an hour or 90 minutes before I've got to come back in with the prospect of a 5:30am alarm call! So I'm having real reservations about what I can do for Blog Wars. I'm only hoping I can complete the knight, even then I may have to borrow Ben's Cerastus, so really should be focusing on the Tactical Squad, but all the time I'm reminded that the army isn't complete and as much as I don't want to take the nids again part of me thinks that taking the Dark Angels as is, is nothing short of 'fraudulent'.That the standard I've produced on the nids isn't refelcetd in the Dark Angels, even if that's mainly because it's incomplete. I don't expect to win again, with either army but I do feel as a past winner I've a duty to uphold the integrity of the painting competition, and right now what I can deliver just doesn't cut it.