Game 2 PeteB and his footdar

The low down:
As per most Maelstrom games I tried to cover as many objectives as possible in my Deployment. Being able to snatch a quick couple of points without having to slog all the way there first is handy. Anyway you should just be able to make out the 6 objectives - the numbered MDF discs. 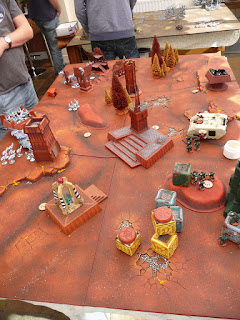 Having stolen the initiative I drew Secure Objective 5 [2VP], destroy a unit in the assault phase and secure objective 2. I already had objective 5, it was in front of the Basiton but I also secured the centre objective, in case I drew that next time, and moved the Scouts on top of the man-made hill. 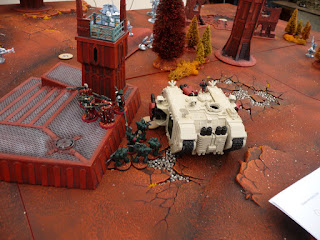 Which was an ill-thought out decision as they were promptly shot to pieces by the Warp Spiders, Camo Cloak and all! First Strike for PeteB 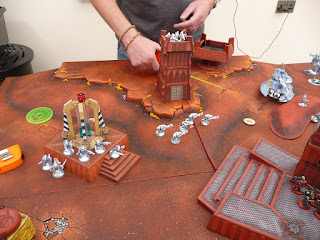 Pete drew - kill a character, secure objective 5 and secure objective 3. As I had all the odd numbered objectives he was going to have to dislodge me off them first. Karandras and his boys sprinted across the battlefield. 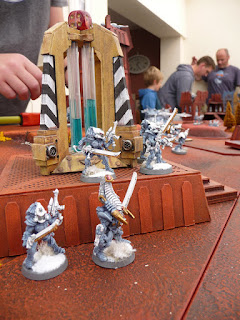 The Warp Spiders followed up their Scout slaughter with a little Warp jump, having killed the Sergeant in the Tactical squad Pete had also gained a VP for killing a character. The Fire Prism then turned it's sights on the Deathwing Land Raider. 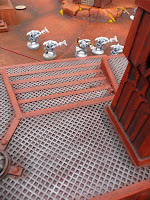 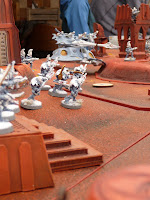 And was able to pen and Explode it with only the Techmarine suffering a wound in the blast. 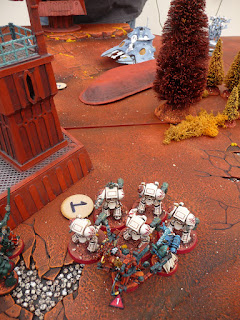 I had discarded objective 2, it was in Pete's deployment zone and picked up secure objective 4 and 3. Swift was my retribution as the second squad of Terminators arrived and I was able to kill some of  the Warp Spiders. I also moved one member of the Tactical squad out of the watchtower to secure objective 3 in front of it. 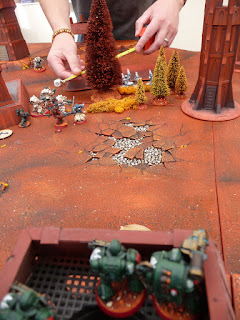 Given their exposed position Ezekiel cast Invisibility on the Terminators, as they advanced to secure objective 4. I came away with 4VPs for both objectives. 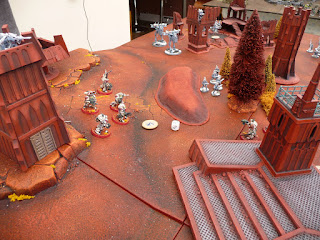 Pete now had 3 objectives, rolling objective 4, as the new one and still had 5 and 3 to claim. The Swooping Hawks landed right behind the marine holding objective 3 and conveniently out of sight from my Quad Gun. 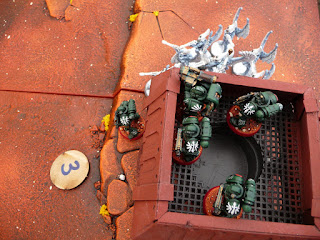 The ensuing firefight allowed them to secure the objective 3 and cinematically shoot and kill all the Marines standing above them on the grated floor, with only one surviving thanks to the intervening cover of the tower lift shaft. 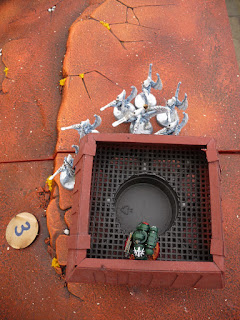 Over on the far left I've managed to whittle all the Striking Scorpions down to Karandras and even he had not gone unscathed. 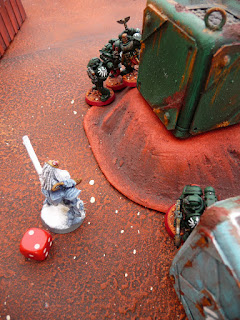 Undaunted my troops assaulted but he killed them with ease 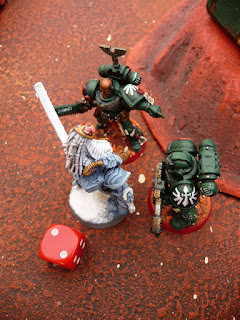 consolidating out of sight behind the future container boxes. Now after the game we remembered that Karandras was ObSec [as per Blog Wars rules] so he could have claimed objective 5 at this point but we'll discuss the whys and wherefores at the end. 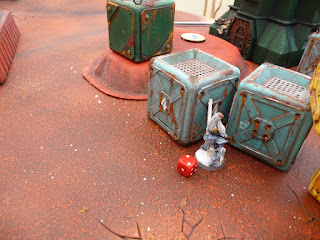 I now had secure objective 1, 2VPs if I hold any three objectives and still had destroy a unit in assault. The newly advanced War Walkers were just in range of my Storm Bolters and I was able to kill one. They still held objective 4, my remaining Tactical squad member held the centre objective 1 scoring me 2 VP and the Bastion had objective 5 so that was three objectives secured for another 2 VP 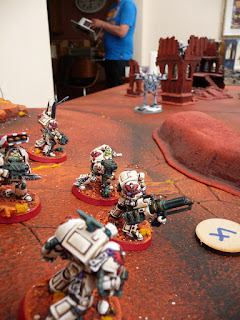 The other terminators and Ezekiel managed to wipe out the Fire Dragons in assault, I think they'd suffered in the previous turn due to the remaining numbers. This cleared me of all my Maelstrom missions and won 5 VPs in total. 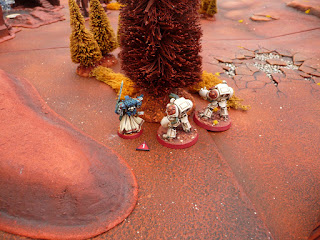 Pete still had to secure objective 4, but those Invisible Terminators were proving difficult to remove from the board [I see Invisibility is no longer legal at Blog Wars so again that would have been different] He also still had to secure objective 5 and 1VP if he killed Ezekiel. Karandras launched himself at the surviving members of the Plasma Cannon combat squad, killing the remaining marines while spinning up and off the future container crate. 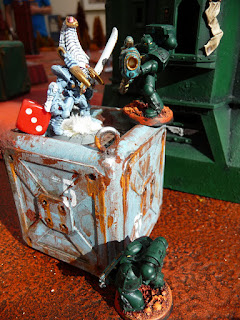 Karandras ended up just out of fire arc of the Bastion and it's occupants with the Swooping Hawk Exarch also supporting. Once again he'd have stolen this objective off me if we'd remembered the rules correctly but it's a bit difficult to work out what we would have done if that objective had already been scored. 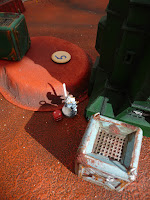 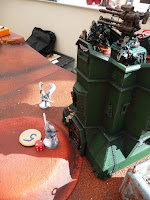 My new set of objectives were - kill 1 enemy character, have 3 scoring units in your own DZ and none of your enemy's, and 2VPs if I hold2 objectives and at least twice as many as my opponent. Well I had the two objectives, Pete only controlled objective 6 in the ruins. But I was going to struggle to clear out my Deployemnt Zone as Karandras and the Exarch just wouldn't die. Meanwhile I think the Reapers and War Walker had done the business on my Terminators now that Ezekiel failed to be make them Invisible. 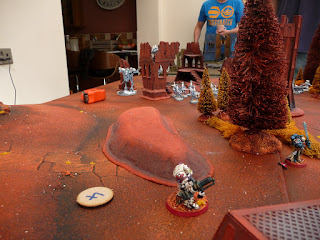 Karandras managed to punch apart the Bastion but my sole surviving Marine held the objective to contest. Once again this was incorrect as he's a Devastator Marine so if we'd remembered Karandras was ObSec objective 5 would have been Pete's. 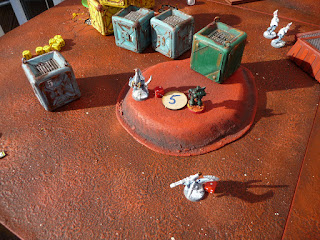 My turn didn't amount to much, I rolled objective 6, which was under the War Walker and just didn't have enough models left to kill Karandras and the Exarch or have 3 scoring units to survive in my DZ. I think all I had left was Ezekiel, the Devastator Sergeant and possibly one Deathwing.
Pete's turn 5 and he was also able to kill the last of the Deathwing and finally secure objective 4. He also won objective 6 and Karandras killed the Dev Sergeant to secure objective 5 - 6 VPs 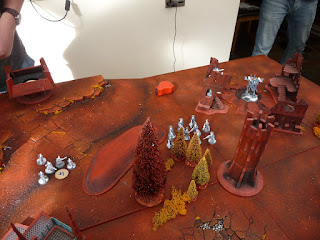 To cap it all Ezekiel stood exposed on the man-made hill. 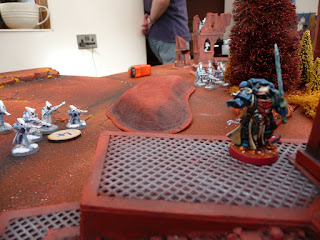 And was picked off by the last two Warp Spiders giving Pete Slay the Warlord. 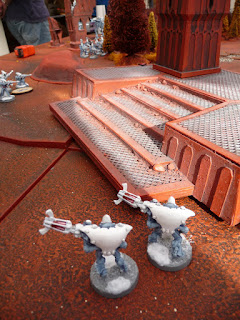 So the final score was 13 VPs to me and 11 to Pete. Of course if we'd played ObSec on Karandras we'd have had a different result potentially. We can see what Objectives Pete subsequently rolled, and when we tried to figure it out it still looked like 13-12, but we can't predict whether his actions on the board would have remained the same. Ultimately neither of us played our heroes with ObSec so that was consistent, the only real issue being I was contesting an objective when it would have been lost earlier in the game. Anyways, I was tabled so although I technically won it feels like I lost so I think we called it a draw in the end. It did show me this list was slightly more viable and mobile than I thought but I was really helped by the mission choices.