I'm managing to get an hour or so here and there on the Lancer and although I went ahead and put my first set of highlights on it my confidence was immediately shaken by the results. My Vermilion didn't look good. I'd stippled it on and felt it was just not quite right. It certainly didn't sit well with the chevron stripes but they've not had the black added because I'm not 100% happy with the angle of the stripes towards the back of the carapace. 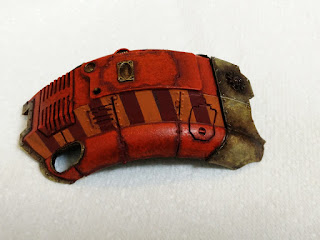 So filled with doubt I girded my loins and shifted my perspective on the results. Rather than be frozen by indecision I decided that the loss of the maroon Khorne Red was no loss and this new stippled Vermilion was exactly what I was after and I'll keep telling myself that until I damn well believe it. 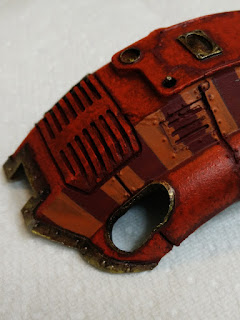 Seriously though, I did realise that I would be applying additional shadow washes in much the same way as I apply them to the bonewhite on my nids. A sepia wash across the entirety and then a Devlan mud wash in all the edges and creases. This way I would blend the areas left Khorne red with the Vermilion and then the next set of Vermilion highlights would show up against the areas of Vermilion that had sepia applied. Then I could use my prepared Red Planet BASE! highlight colours to the pure Vermilion and build up the highlights naturally. 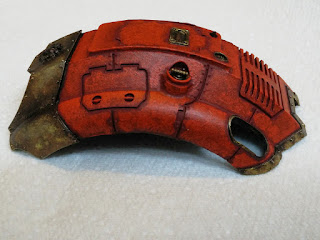 As the principles were the same I became confident again, there's a little part of me that will miss the dark red version that could have been but that exists in another dimension in the multi-verse so I'm sure another me is happy with those results, maybe regretting not going Vermilion but equally comfortable on his space yacht surrounded by his 67 wives, I love those other dimensions where I'm doing really well! 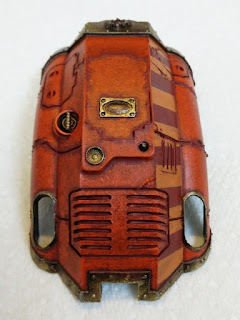 The chest and groin plate have also been brought up to scratch it's quite difficult to keep up with which bits have been done though as some parts will also need washes on the metallics and having not created a tick sheet for each component I'm trying to keep in my head what needs to be done next and which bits are still outstanding, perhaps that list would be handy and keep me on track? 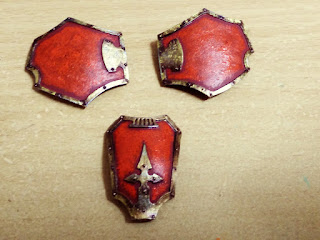 I do like the stippled effect of this craft acrylic, it has rendered it to look a little like hammered iron which is pretty cool for a £1 tube of paint. I'm hoping it'll help with the highlights, making it less reliant on smooth blends but with an interesting finish. 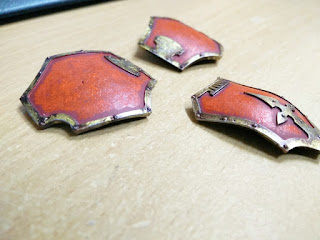 Meanwhile I did see this Knight on facebook. Sadly I forgot the users name after I downloaded it, he was selling it anyway. But I love the finish, particularly on the white shoulder pads, this is also what I was hoping to emulate. 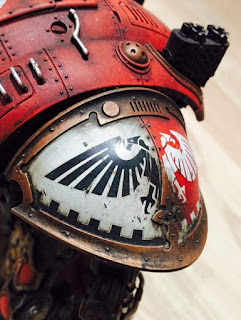 I may have gone a bit lighter on my metallics than this and will struggle with the decals thanks to the stippled texture but PeteB swears by MicroSol so I may get that hoping to mitigate the creases that can form. 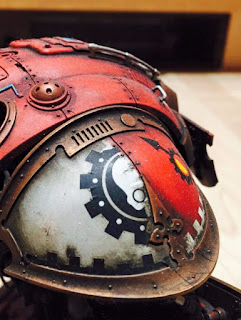 It's really awesome though, so I just hope I can do something similar without getting too carried away with highlights as this relies more on shadows from oil washes to achieve depth and dimension rather than artificially highlighting the model which is the way I do things. 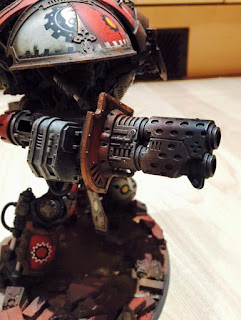 We'll have to see how it goes though...