Probably not what you all want to see, me back on the nids but abandoning the Dark Angels for Blog Wars did suddenly allow me a little scope to return to what's familiar. He's also on my To Do List so I don't feel too bad. OOE has been in hibernation for a good while now, having completed the base [except bonewhite chips] and all the base colours and washes. All I needed to do was the chitin, bonewhite, black claws/hooves and SFX. So with the pressure off on the forces of the Imperium I quickly painted all these chitin highlights, but you can see it wasn't all plain sailing as I got bored part way through the vents and stopped, probably did some little bits on the Cerastus 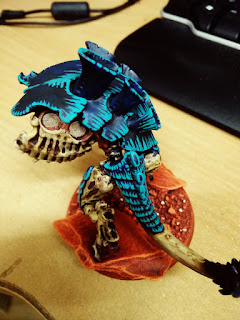 Then I was able to finish the first set off the following night, had another flit back to the Cerastus and then the next night I did all the second stage highlights. I have to give myself some credit that I did those spots on the chitin way back when. Looking at the pic above compared to the one below there's no way just the feathered highlights alone would suffice. The spots just add something extra, break up the carapace and actually draw your eye away from the dodgy brush strokes on the feathering! 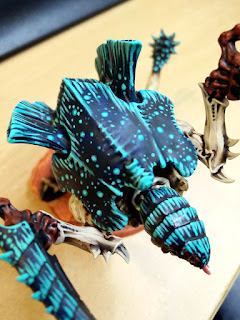 The Sything Talons had already been highlighted. There are some Crushing Claws to do but I still have my magnetised Tervigon Claws so I can use those instead. 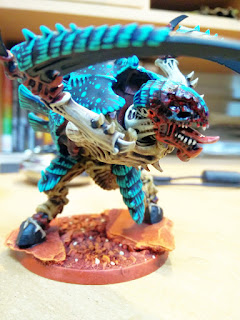 I'm still very much committed to the Dark Angels and the Knights, so do not fear this is me back-sliding into the digestion pits of the Hive I'm just very conscious that there are elements of the Knight I may yet agonise over and as I've identified on numerous occasions having a variety of projects on the go allows me to direct my efforts on things I can and want to do when other things are beset by hurdles ot overcome. Hopefully then I'll have time to reconcile the issues while sitll being productive elsewhere. For instance I glazed all the Cerastus armour plates the other night - a complete non-job that would have slowed progress waiting for the glaze to dry if all I was doing was the knight. Meanwhile I have questions about picking out details in some of the pipe-work on his torso which I need to answer or just leave as is. Hopefully this detour will help clarify or perhaps jumpstart me to just do it and stop questioning. I think that's the problem with painting, you end up with too much time inside your own head!
Posted by 40kaddict at 12:17