See, I AM painting them! For some reason the Scouts are calling to me I think it's the camo cloaks and the plan I have to paint them. Of course they have to be red so I'm introducing yet more to the colours in my Dark Angels mix! As I needed to tip my last order from Element Games* [see below] over the £80 for free delivery threshold I also got some Martian Earth technical paint and some Khorne Red base - which I believe is the closest to Mechrite Red and not that Mephiston they tried to foist on me when the new range came out. So I had a quick go on the cloaks and I'm impressed. It seems a lot thinner than the old Foundation paint but went on very opaque. It did dry a little less so but I can live with that. 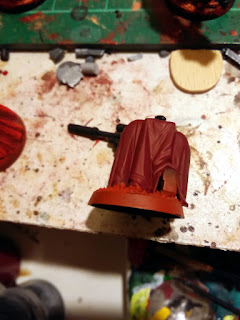 I then drybush/wetbushed the cloaks with my Vermilion craft acrylic. Even when dry this became a little tacky to touch but it did add a subtle texture I hoped to benefit from in subsequent highlights. This is going to be a lot fun as it's all rooted in the Ferron Proxima theme so I'm loving the opportunity to do my Ferron camo pattern, regardless of the not inconsiderable effort involved. 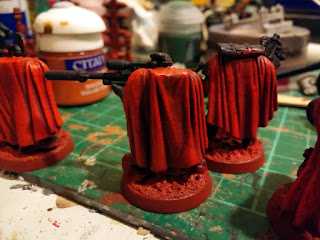 Sadly the Milliput cloak is a bit out of place amongst the plastic counterparts but hopefully it'll be less conspicuous once complete. 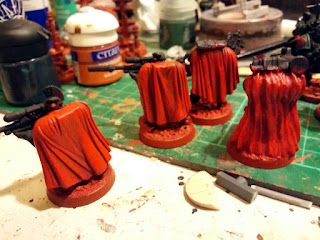 And my Jetfighter is starting to come together. I want it magnetised so I can try both flyers and looking at the leaks I want to try both flyers! However, the cockpit/canopy situation is a bit fussy. I was debating the colour of the canopy, originally it was going to be Tamiya Clear Orange X-26 but I think introducing orange into my Ravenwing may be a mistake so will go with Tamiya Clear Red X-27. I've sprayed the internals of the cockpit Red Oxide and washed it, I won't have to do a great deal inside as most of the colours will be obscured by the canopy colour. 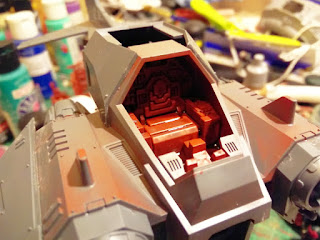 Although it would be nice to see the result before sticking it in I'm not so sure that's possible as there are still two extra pieces that enclose the canopy to glue in places which actually makes the canopy impossible to open - sounds like typical AdMech design principles! 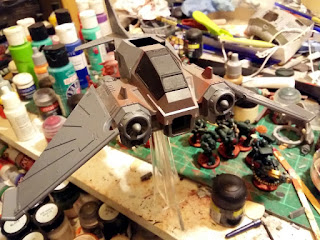 This is what arrived from Element Games - my missing Ravenwing Command Squad/Knights box. 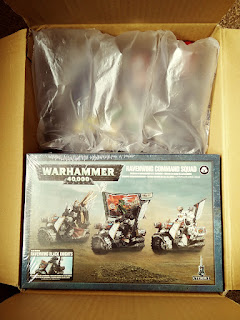 And my Google AdSense funded Imperial Knight Warden and two pots of paint. OOH I'm gonna have me some fun! 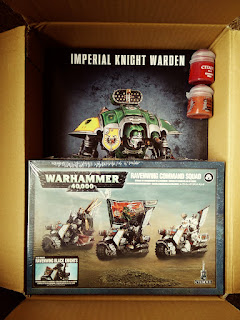 * Incidentally when I ordered from element games I got some loyalty points and a code so you can get double 'Element Crystals' (Store Credit). My referral code is DAV910.
All you have to do is enter the code above at the end of the checkout stage, or not, it's up to you.
Posted by 40kaddict at 12:14