Blog Wars 9 - King in the North - The Aftermath

Obviously I’m back from Blog Wars 9, it’s only down the road afterall but I’ve only just had chance now to round up what went down and it was this: 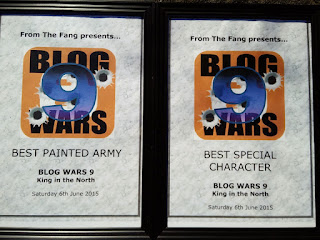 So I came away with Best Painted Army, as I did in BW6, but I also secured Best Painted Character for Deathleaper. As I accepted the award my old Squat opponent Graham Sanders joked I should bring a new army next time but it did allow Alex to address the issue of previous winners winning again. I get why some people would think that it’s unfair if it keeps on winning but by that argument you would have to stop people bringing a tournament winning army list repeatedly or in the wider world tell Lewis Hamilton he couldn’t use the same car each race. That just doesn’t happen so why would the painting competition be any different?

But if the consensus changes then I’ll live with it, fingers crossed though I can actually get the Dark Angels done for November! I honestly understand the view not to have previous winners allowed [although I don’t share it] and I do want to run with something different, it’s just the lure of the Hive Mind is very strong, despite my initial aversion to them!

To be honest I actually thought Liam would win and apparently there was only one vote in it, I think if he’d have brought his Armies on Parade winning themed board to go with the Tau he might have snatched it. He did however win the best conversion category so it was still a successful day for him, especially as it’s a new category that he’d not won previously.

Back to my future Dark Angel army and I finally used my Birthday voucher that my gaming crew kindly got me and picked up the Dark Angel Expansion box. 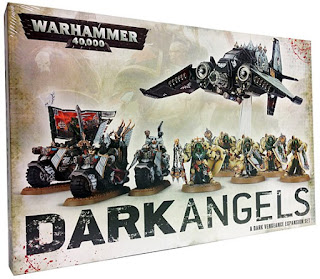 I was so excited I even opened it in the car and got even more giddy when it seemed they’d given me 10 Deathwing Knights instead of the 5, I couldn’t believe my luck until I realised there was no Ravenwing Knight sprue! Clearly I’d got two lots of terminators instead of one each of bikes and Terminators. So I’ve contacted Customer Services and the email so far will need following up. I of course got it from Element Games so the first advice is to return it to the store, but I'm not sure when I'll have time to get out to Stockport again. I know it's only a quick trip on the train but it's my lunch hour I'll have to give up. 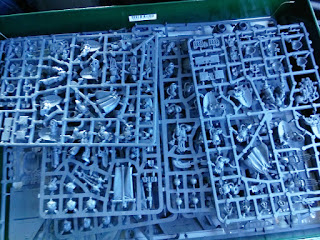 Also this was the last box they had in stock so I'll have to wait a while for a replacement. More worrying is the request for proof of purchase in that stupidly I was juggling my lunch, while talking to people in the store so never actually got a receipt! I'll try ringing GW and Element tomorrow see what they say but given how long I've waited for these I'm just a little bit disappointed about the whole affair.

Anyway, Battler reports will follow shortly, i'm really struggling to fit blogging into everything and I've actually got lots of news to share, darn it!