PeteB and I got a Blog Wars rehersal in the other week, its taken a while to get round to writing it up so I'll be hazy in places. i think I was just trying to forget the result *SPOILERS* but as you'll see if it's Purge the Alien it was never going to end well for me!

I lined up, trying to cover the Skyshield so nothing could land on it, I really should work on my Skyshield positioning a bit more I need to make it so folk can't actually assault anything unless they can get under it [when I say 'folk' I mean anything big and nasty] 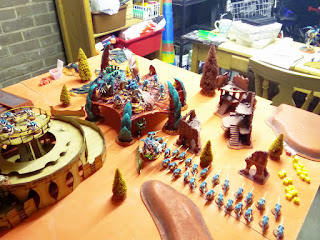 We were a bit hazy about Pete's new Eldar terrain, we went with it behaving a bit like the Fortress of Redemption - a 3 part building with AV14 all round, no that it was going to protect the Genestealers, but where else was I going to put them? 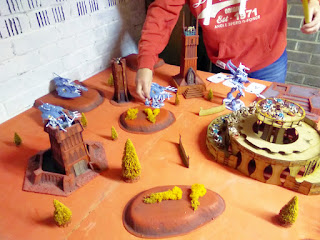 Deathleaper hid behind a tree because I had nowhere else to put him. 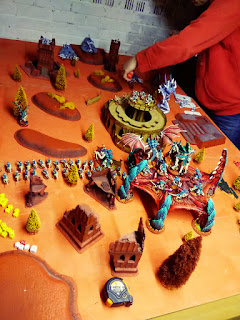 Pete's Wraithknight headed for the Genestealers while the Fire Dragons disembarked from the Wave Serpent and tried to do some damage to the building but it shrugged it off. 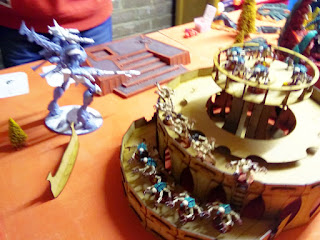 The Wraithkight smashed into the Wraithbone building - And levelled it taking all 5 Stealers out int he process. BW has a First Strike rule - you get a VP if you kill a unit outright in your first turn. This replaces First Blood so both players can get it but as it's only first turn there's a slight difference. Anyway, I swooped my Flyrant forward and took my chances killing the Fire Dragons. I whittled them down to three and a wounded Exarch but couldn't get the First Strike - damn Devourer's AP-! 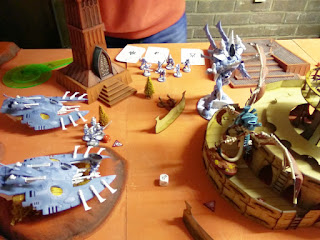 The Stealers moved into different sections to get away from the Wraithknight or at least draw it near something I could have a chance at overwhelming it with numbers - a mix of tarpit and anything that might scratch it. 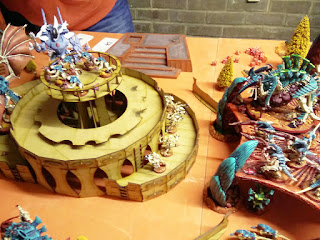 Everything else moved forwards and tried to conga and keep shrouded by the Venomthrope. 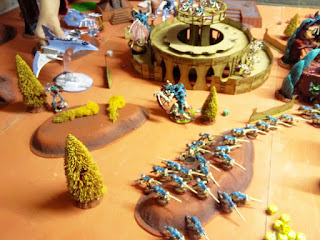 Turn 2 and the Striking Scorpions arrived with Karrandras - eek! 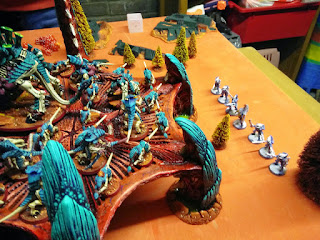 Weight of fire from the Dire Avengers who just decamped from their Wave Serpent out of picture left, manages to put a wound on Deathleaper, despite the Snap Shots. While the Hemlock Fighter arrives 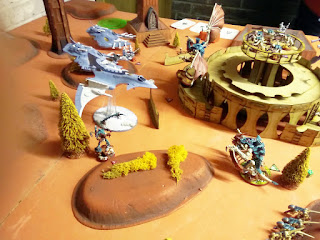 and removes my Carnifex without blinking, I'm wishing I had two Venomthropes now! 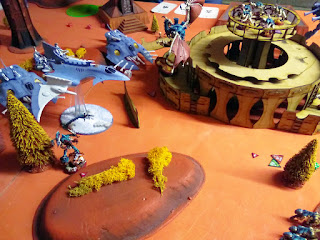 My turn and Genestealers Assault the Dire Avengers which may have been whittled down by the Flyrant. Deathleaper managers to challenge an Autarch, gets 6 attacks, hits twice on 3s and there's my wounds on 2+ dice - snake eyes! Thankfully the Autarch is equally rubbish and does nothing to the galxies most feared ambush assassin killer... as I won the combat the Eldar fail their morale and run off I fail to beat their initiative, yes with Genestealers too! 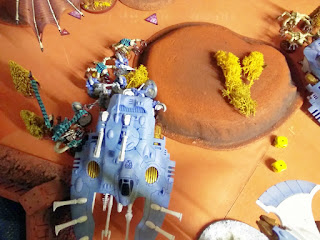 I think the Wraithknight managed to wound the Tervigon with it's Hammer of Wrath and takes another wound, my Smash fails to hit in return but the Stealer managed to make a wound [or two] and then the Wraithknight Stomps all over them leaving just one and takes out the Hive Guard while it was at it! 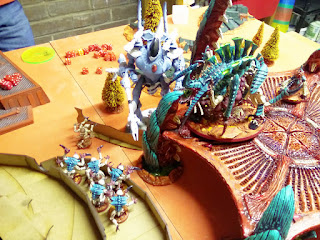 Not sure who the Flyrant is targeting here but I think I cast Catalyst and perilled in the process but stayed in the air. The Dire Avengers rallied, obviously, so thos Genestealers were dead even with FnP 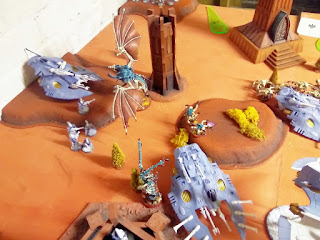 With the Striking Scoprions threatening my back field I sent the Termagants and Warriors. mandiblasters were once again successful with my shooting being less than stellar before the assault. Most of the Termagants suffered but the Warriors fared a little better killing a few Scorpions. 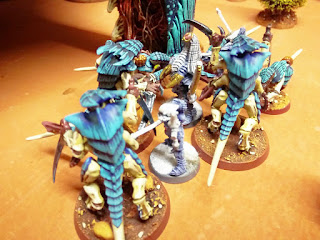 The Hemlock lined it's sights up on the Venomthrope, although by this stage his Shrouding was benefitting very few. 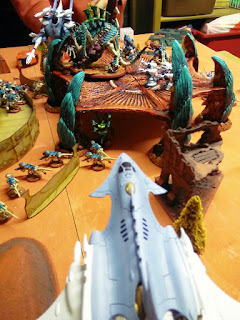 45pts is 45pts though and theWarp Spiders had cleared the landing pad of Biovores so who else could it target? 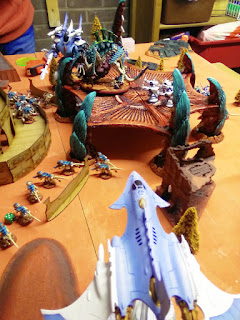 I think Deathleaper may have been killed at some point, it looks like he killed the Autarch but was then out in the open and all the shooting from the Dire Avengers wa stoo much for his Chameleonic Skin. This was probably the least effective performance I'd eve had of him, which bodes well. I'm not sure at what point the Mawloc turned up but he missed his target so was no use in the remianing time he was on the board. 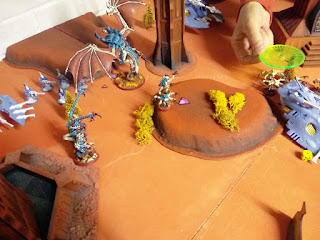 The Scorpions sliced through the Warriors but there was only a lone Scorpion and Karrandras left but I think they prevailed in the end. Meanwhile the Tervigon got smooshed by the Wraithknight, it had managed to Smash a wound onto it and the remaining stealer also managed to wound it, I think I'd managed 4 but it had also saved a couple thanks to FnP. 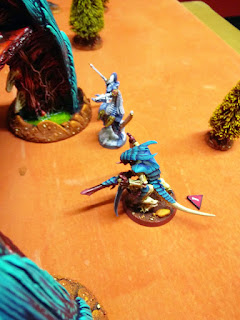 Ultimately this was a bit of a white wash. Once again I was reminded of just how little guaranteed killing ability nids have. Flyrants are universally fêted as our 'best' unit but those Devourers, however strong, just do not kill thanks to AP-. And it can't score while swooping so although it's a lot harder to kill it costs a lot of points and it doesn't impact things as much as it should. The Mawloc was useless which reminded me that without a Comms relay relying on Reserve rolls is guaranteed to make you go grey, or lose your hair!

So the Mawloc is out and although the Warriors didn't do too bad I've binned them and the Biovores too. Deathleaper was awful but I've painted him now and I may well try and find a way to make him work this time... The great thing is this rehersal has allowed me to excise some of the elements I don't rate but were in my list regardless and now I've added in some new and different things. I'll get one more game in against Ben before BW9 but I definitely need ot make more use of my Skyshield, particularly in this mission. I need to remember I can't kill so I must survive, lure things to me and position things better on the Skyshield so I can't be assaulted.
Posted by 40kaddict at 12:20