It finally had to happen, I've watched the might of Otty's nids face down the decurion and heard all sorts of horror stories versus PeteB and even Otty's 21 D-weapon Eldar [about the only thing that can touch the Crons]. So I couldn't put it off and it'll be practice for the weekend. I even suggested we randomly see which mission as Kill Points is not something I should avoid, so what did we roll...


The low down:
I set up conservatively, trying to learn from my last game but still put three units of Stealers in the centr ruins but that had allowed the Flayed Ones to deploy in my end. So I put some Stealers in my back field and put Deathleaper in a position to go both forward or back in support. 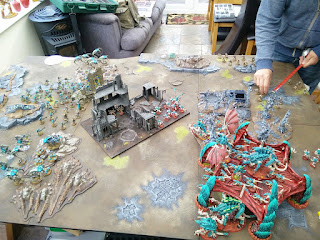 And this is the mass of living metal I'm facing, I'm so doomed. 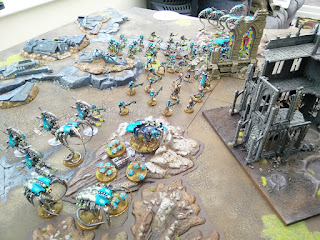 I wasn't thinking  too clearly and forgot to put anythhing in the drop pod but I have three Rippers so deployed them inside, they've got deep strike anyway but I can sacrifice 6pts to concentrate my force. 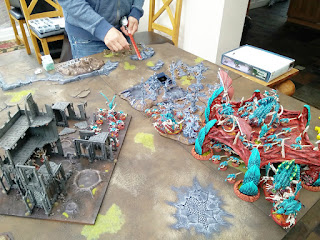 Pinning tests failed to halt the Flayed Ones and the Tomb Blades just passed also, well worth the Warlord Trait. 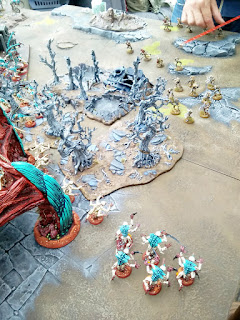 Everyone was having a jolly time on the trampoline of doom. 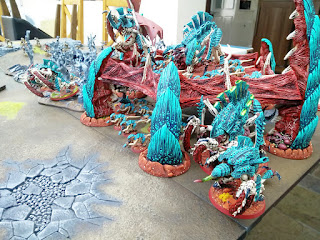 So from the off I forgot how fast the 'slow and implacable' Necron force is with Wraiths and Scarabs getting in charges first turn. The Wraiths easily  removed the first unit of Stealer for First Strike, I think I managed a single wound in return thanks to their Invulnerable saves AND Reanimation Protocols. 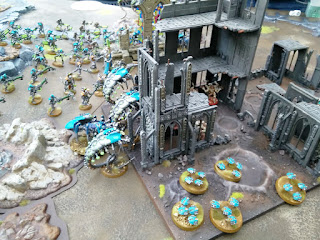 The Necron Horde targeted the remaining Stealers, pinging off a couple while night fighting helped save a few. Scarabs got into a multi-assault with the remaining Stealers and even Deathleaper. Most of the Stealers diamond tipped rending claws failed to do much damage Deathleaper may have done OK except Reanimation Protocols brought them back. One of the Stealer broods was reduced to a single model who broke and ran. 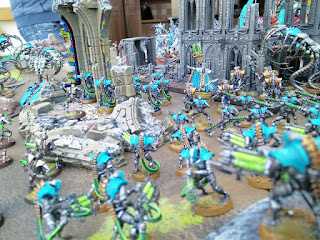 The Flayed Ones went hunting. 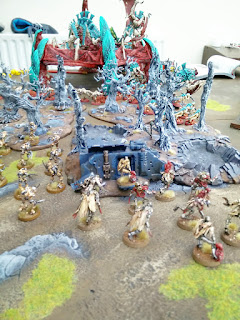 I was lucky and managed in my go to take out one of the Wraiths thanks to a 10" charge and 3 Hammer of Wrath strikes. The other Carnifex took a couple of bases out as did Deathleaper and the Hormagaunts were useful. I considered Hit & Run with the Stealers and Deathleaper but that would have left them exposed in Ben's turn so I kept them embroiled. The Flyrant [just out of shot] managed to rally the Genestealer and shot [and killed] 3 Flayed ones! 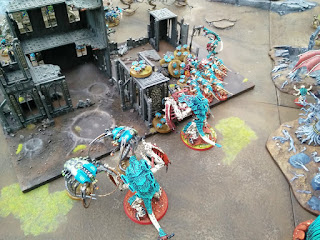 Nemesor managed to get his Praetorians into combat with the Carnifex, so much for slow and purposeful! While the Tomb Blades also moved up. 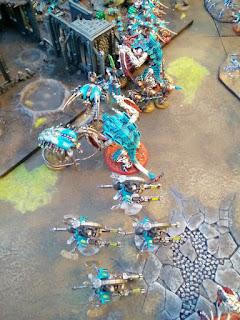 The centre of the battlefield turned into a massed scrum. More Wraiths assaulted Deathleaper, Hormagaunst and another sole Genestealer. 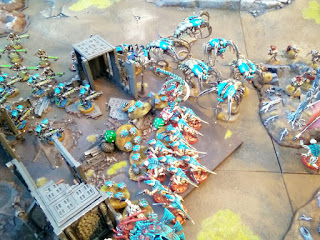 Flayed ones faced off against the Genestealers 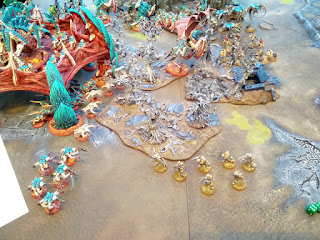 and assaulted. The premier close combat unit in the 40k universe managed to kill 1 Flayed One. 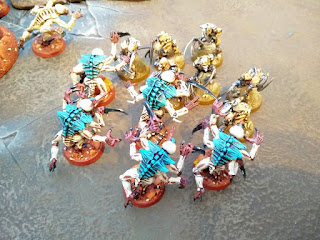 Inn return I had to make 10 armour saves, as you can see I made half of them but given my brood was only 5 strong [or should that be weak] that slaughtered the unit. 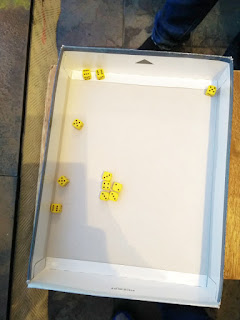 Ironically the recently rallied lone Genestealer was also assaulted by the whole Flayed One unit and managed to do the same amount of damage as five of his coleagues. We didn't even bother to roll the dice to see if he would survive. 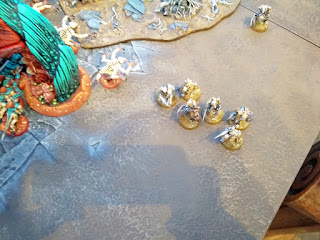 Nemesor and the Praetorians killed the Carnifex, with the rmaining one still locked in combat with the two Wraiths. 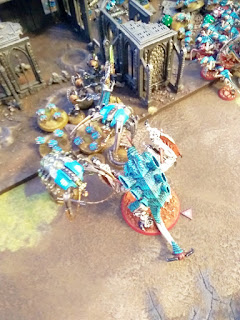 The Hormagaunts perished and Deathleaper took a couple of wounds and the Genestealer was largely ignored so the both Hit & Run out of the melee. 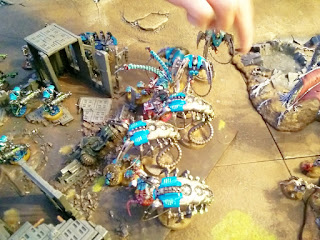 I managed to Challenge Nemesor but as if the wealth of rules the Necrons and the Decurion already have Nemesor also gets to borrow/steal special rules from units nearby, like Stealth so even after manifesting Warp Blast without Deny the Witch on my Zoanthrope, hitting AND wounding the fact he had Stealth from Deathleaper JUST sace his sorry a$$. So Deathleapers Challenge ended in him being cut to pieces. He actually did quite well, wounding 4 times [two rends] but the 2+ save and Reanimation Protocols negated everything. Meanwhile the Tyrranofex tried to kill the Spyder, with a couple of wounds taken I think for a wound on the Spyder. 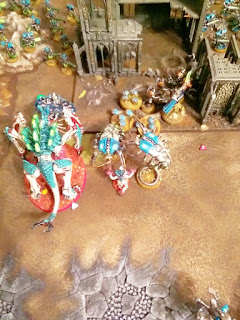 Tomb Blades also Hit & Run out of the assault with the Termagants. They'd lost about 8 of their number and despite Counter Assault they just weren't strong enough to pierce their metal hides. 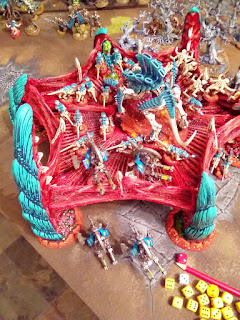 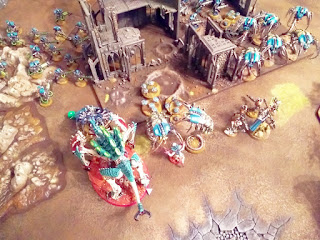 Slow and steady Wraiths head for the T-fex while Nemesor makes it to the Skyshield. 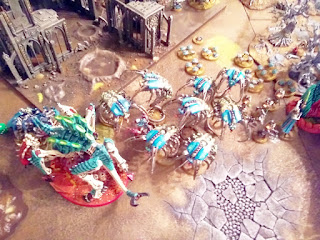 Tomb Blades reposition to shoot the spawned gaunts under the Skyshield. 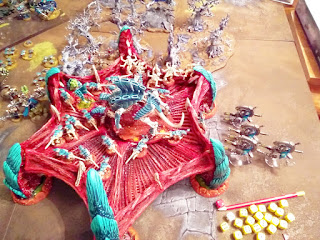 In my turn 2 the Tyrannocyte arrived and killed a Warrior, that was actually a big deal for me even if 15 shots from a blind flesh sack resulted in only one kill! 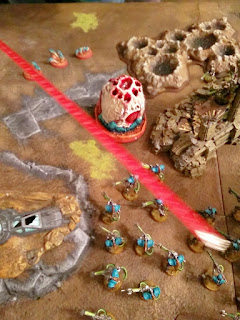 But my glee was cut short in the next turn when it was pulped to bloddy gristle. 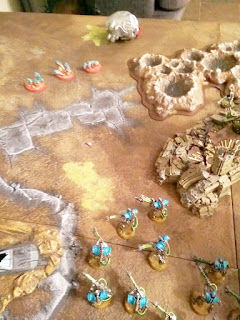 Tomb Blades try to assault the spawned Termagants, I get one Overwatch and manage to wound and it fails it's save AND its Reanimation Protocol. With a 5" charge Ben only rolls a 4 so he fails to engage. 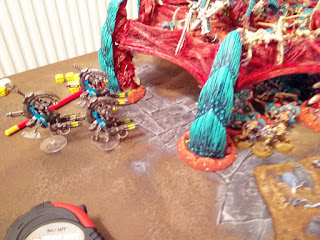 The Flayed Ones make it in though and things wiull go downhill for both this unit and the final 5 that were spawned to the right. [Teh Spawn of Cryptus is proxying for my Venomthrope which I left at home]. 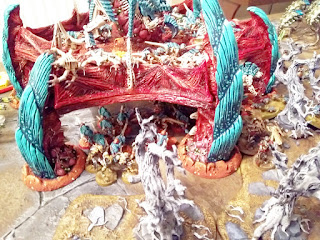 With all those Wraiths lined up to do unspeakable things to the already engaged Tyrannofex things did not go down well and I think shortly after this we decided to call it a night, even though it was only the beginning of my turn 3 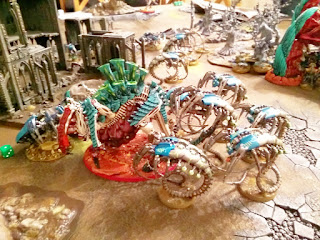 The headline score comes across as very depressing. Ben was able to kill two thirds of my army in 3 turns - 1230pts and my tally was more like 130pts! not even 10%. Now I had some success and some failures but the real question is that if you took away Reanimation Protocols how much would that have added to my score, sadly, but more worryingly I don't think it would have gone beyond 500pts!

So even without Reanimation Protocols I think the units at the Necron's disposal are much better in this sort of scenario. They seem to have rule after rule, making an already good army even better. The only things they seem to lack is a high initiative and Psychic Abilities but as the vaunted 'Psychic Phase' is pretty much a time wasting exercise in futility that's no great loss. They have high strength weapons, they have high AP weapons, units that move 12" - compare a Wraith to a Ravener or a Scarab to a Ripper!

Even the Flayed Ones outperform Genestealers. We ran a test, 10 on 10 with Stealers getting the charge, they were wiped out with the Flayed Ones losing only 3 or 4 in the process. So much for the premier close assault unit in 40k!

Ben's suggested our next game we replay it but without RP to see what difference it makes. Overall this was actually a lot of fun. Sure the result was appalling but we had a good laugh and I think Ben is coming round to the idea that they're overpowered so he can laugh at the ludicrousness too. Still I felt far happier with my list than the previous one I played against Pete so bring on Blog Wars!
Posted by 40kaddict at 12:09