Bless me readers for I have sinned, it's been nearly three months since my last confession. Before I begin did you notice the picture? Unfortunately it reveals my dirty little secret - this is indeed my palette... 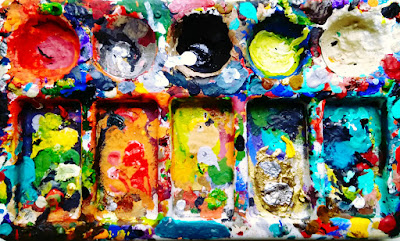 And for a good long time I've been introducing these articles with the same palette, when it looked like this! I guarantee there may be some who are aghast at how I manage to paint like this, well you haven't even seen my brushes! I actually think the biggest problem with this desire to see how my palette ends up is that the dried paint is a little more porous than I'd like so paint does tend to dry out quicker than it should. I can indeed fix this in an instant as I have a couple of these 25p palettes, unused and unsullied going spare

Anyway, now I've shared my shame what am I up to? Well I made these - my own Maelstrom objective markers. I'm sure monkeychuka or someone else did this recently. The original plan was to leave the nodes unmolested and just put Adrenal Glands scuttling over the nodes in the correct numbers but in the end I just hacked my way through. Once again I was reminded about how brittle the Deathstorm plastic is, literally fracturing every time I used clippers on it. I also recently saw on Facebook some amazing markers using a variety nid components and a lot of hot-melt glue. The most impressive one featuring just Spinefists [impressive because it found a use for Spinefists!]. I'm just waiting for a couple more of these bases so I can prepare another 2 and 3 node marker for the mixed VP objectives in the Scouring - Eternal War Mission [remember them?]. But these will be done for Blog Wars. 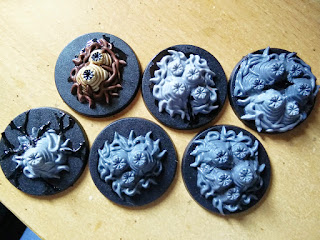 Also this curve ball - Genestealer Cultists. These are actually on my To Do List so I don't feel bad about dragging them out of stasis. With talk of Genestealer Cult upcoming I thought I may as well get my headstart on it. They may be completely inappropriate but I just thought I'd crack on with them and see how frustrated I'd get as the last lot of cultists weren't particularly trouble-free. It's both very exciting but also a little worrying I may kill my new found mojo and momentum thanks to the recently completed models. 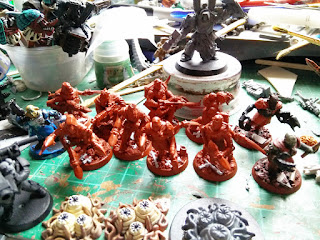 Yep, more random. PeteB had some Space Marine Scouts going spare. They've been converted with Space Wolf heads but were easily to retrofit with some of the spare scout bits I got from way back and even a few of them were OK with the mohicans and pony tails as I can see Native American references - Mohican obviously so Dark Angels should really own that look instead of the dog boys. Just some removal of side burns makes them less Norse. I also need to sculpt a cloak on Missile Launcher. But these are just another 5 models to add to my undertakings but they're DA so I can forgive that. I'll have fun doing the Urban Camo cloaks at least! 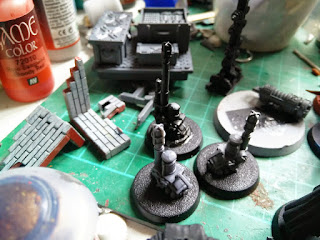 And the Dark Vengeance TacticalSquad, as represented by the Sergeant. I finished his tabard, so I was very pleased with myself. I really just need to crack on with the green armour on all these boys but it requires motivation and a concerted effort for me, even just working on a couple a night. Still they're back on the table so that's a statement of intent. 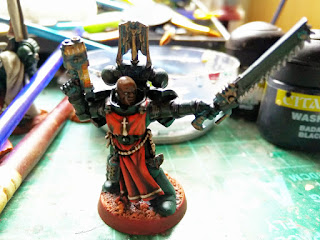 I've also got a few other things on the go but I'll leave those for another time this is clearly sufficient to keep me busy over the next couple of months.
Posted by 40kaddict at 12:15