It's funny, when I originally put down on my To Do List that I wanted to complete a Dark Angel Chaplain this the one I had in mind. That's really only because he was the one that I had, then I thought Asmodai was a beast because I was applying the same rules of melee weapons as how the 'nids work, got the model and then found out he can chose either his Blades of Reason or Crozius not both. 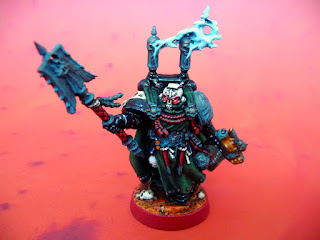 Anyway, from what I can gather Seraphicus isn't all that, you're probably better off with a plain old Interrogator Chaplain and upgrade him to the same weaponry. I have to admit these pics are doing a lot to lift this model, the incense smoke and plasma effect look far more vibrant and effective than in reality. 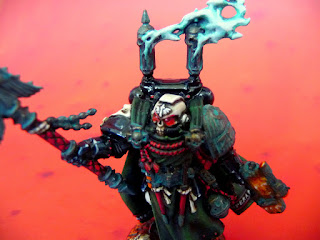 I applied the same gloss varnish to the power armour as I did with Asmodai but it does have a weird effect on distorting the scale of these miniatures. Because the gloss is thick it distorts the finer detail and essentially reminds you this is a tiny model. It's difficult to explain but it's the vibe I get which is overwhelming the intended shiny enamelled armour intention. 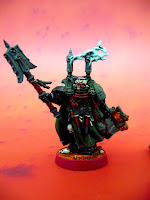 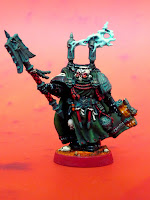 But other than that I'm actually quite happy. I have another lead [pb] Rogue trader Chaplain knocking about that I want to bring up-to-date but I need to put him on a slate base so he stands tall alongside his modern equivalents. I also had a cool DA back pack that has gone missing that would have looked cool on him. Until I find what I'd planned [and I'm not 100% sure what the back pack was] I'll leave him. 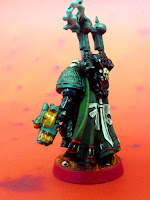 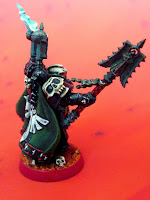 I'm quite chuffed with the cloaks markings. 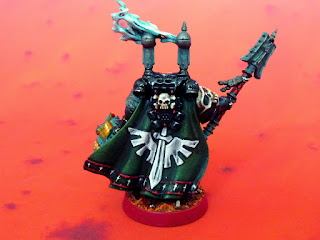 It doesn't stand up to too much close scrutiny but I think I managed to do far more with it than I usually would so I'm happy with that. 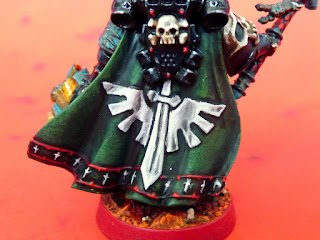 His shoulder skull is still cool too. 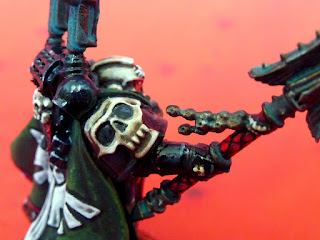 And i like his pink eye too, I mean his glowing eyeballs, like he's just been maced! 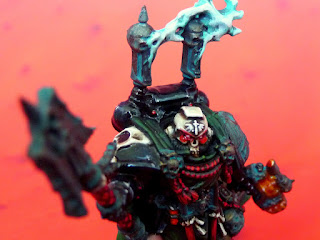 He's kind of cool all round, just such a shame I don't know if I'll have an end use for him. I know there's a datasheet with some Chaplains in that sounds interesting but I'm not sure what the rules are or if they're useful but it might justify this effort. 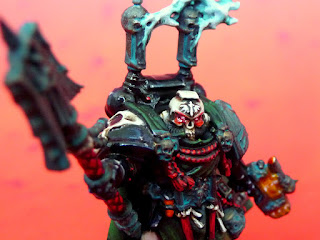 Anyway, here's the Red Stamp of Approval! I've completed a few things recently and taken some better picture than my usual efforts which puts me back in the luxury of having some content to share. Of course I don't want to blow my load so forgive me if I use the next few posts to share these pics. I took a couple of new shots of Asmodai so the colours are less orange, if slightly darker. I did a little photo shoot of them with the other HQ choices so far. Then I've got my Deathwing done and did a combined shoot with my other Deathwing. There's definitely a difference between the older ones and newer ones but the pics are far more forgiving at least. Things to look forward at least.