One of the outstanding examples of 'miniature porn' on display at Warhammer World was in one of the glass cases in the main gaming hall. At the time I just took pictures because the figures were awesome but when I got back home, an a few days later the GW blog posted an article about the display and it just so happens that all the miniatures were the efforts of one guy, Eddie Eccles is his name. Of course I was a bit dismayed I'd not get the scoop on these but I'm doing my best to fit everything in at the moment so I'll not lose sleep.

Most exciting were Eddie's Tau - a hybrid mix of Samurai and Gundam by the looks of it. Creative use of gloss varnish also adds to the richness on display. I particularly love the 'rising sun' motif on the Tau shoulders. 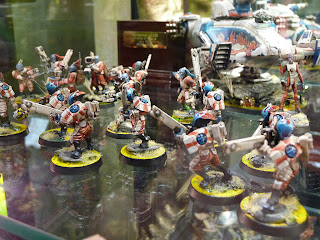 I don't know too much about Tau [and what I've seen of their Codex I'm glad, I couldn't make head nor tail of it] so that big walker in the background looks mighty impressive. Excuse the 'photobombing' by me and my son ;) 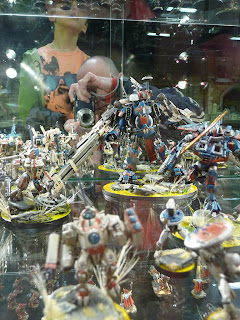 Another element was the hot rod flames on all the skimmers, not to mention the additional battle damage. Eddie has to have a whole lot of balls to do these awesome paint jobs and then 'scuff 'em up' with damage. 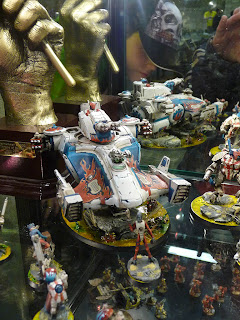 Another awesome walker with a fantastic pose. Also of note are the comedy drones, these have all had their flying bases swapped for Necron legs. Can't help thinking that they're like the Droid army in Phantom Menace and somebody just plonked the dron on top of the lower limbs, ha, ha! 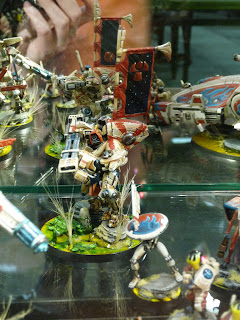 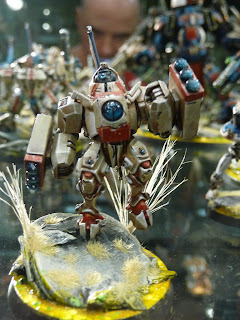 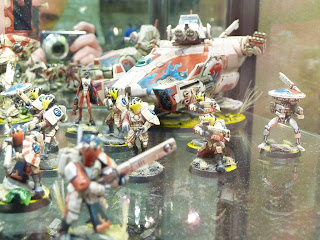 But it wasn't just Tau, these Orks were also amazing. A completely different pallete, more vibrant and saturated, at the time I had no idea they were all the work of one guy. Pleanty of creative 'counts as conversions' using giants to represent trukks or some other Orky weapons platform? 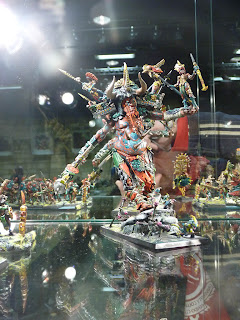 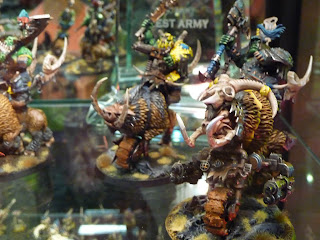 Another Ork 'vehicle using an Ogre Thundertusk as it's 'chassis'. 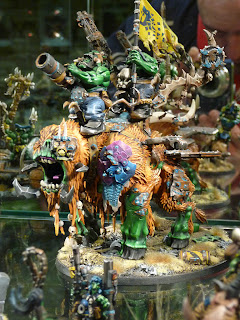 And last of all an awesome Thousand Sons battleforce. This Dreadnought in particular was impressive. 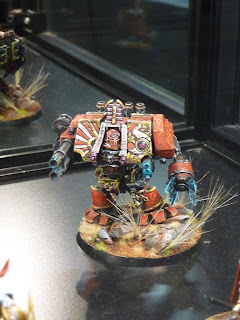 As well as these scouts and their Land Speeder Storm. Again some truly creative conversion or choice of models to make these units unique and exciting. 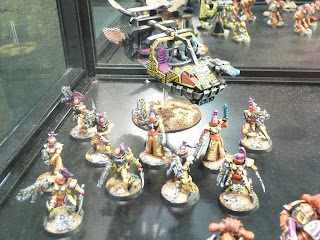