Once again due to the unique way of preparing these posts in advance I have stumbled on a new problem. I still have battle reports for 5th Edition while I'm exploring new 6th Editon so I hope you don't mind having to straddle the two rule-sets to enjoy what went down. For one you've no choice and for two I'm not about to dump the content. This was my second match at the Warhammer World Tournament before 5th expired quietly in a corner somewhere.

Don't be fooled these aren't Grey Knights, they're just vanilla marines with a penchant for metallics. When I saw this line up for Pitched Battle - Anihilation I was pretty scared as you know mech is not what I'm geared for, still a Vindicator, Razorback, Land Raider and Predator is not the most mech I've ever faced. For some reason my opponent was really apologetic about his list, I was convinced I had little chance and he was convinced he would conquer all comers so he graciously relinquished first turn to me. I thought this was incredibly sporting and if and when they came round to ask about sportsmanship I was thinking he'd get my vote.

Anyway his deployment in the top right corner made my deployment so much easier with everyone ready to barrel forward, the Trygon for the Land Raider/Razorback. 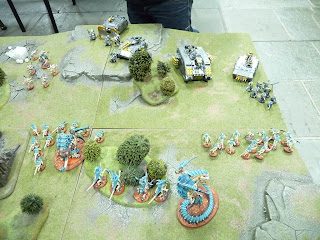 The Hormies charged forwards going for the scouts, 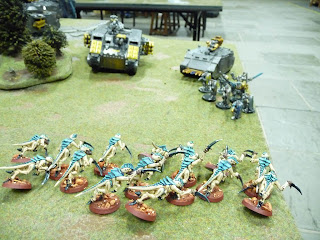 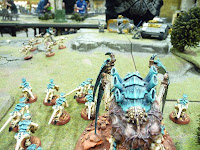 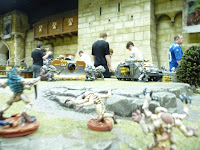 Splat, the Spore Pod came down on target. The Devgaunts popped out and shot at the squad of Marines in front of them. Not sure if they killed anyone, might have taken one or two. The Spore Pod lashed the back of the Predator with it's Ripper Tentacles but I think it only managed to stun or shake the tank. 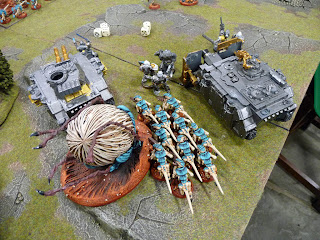 Over on the right flank the Hormagaunts finally got to grips with the scouts and out of the 24 hits, this first 12 rocked up seven 1's! Of course this was handy as their scything talons allow them to reroll 1's. However at this point I started to get a little frustrated by my opponent. My early respect for his grace in giving me first turn was spoiled by the fact he revealed he had not brought his Codex and he was convinced his scouts had the same stat lines as a full Space Marine. Once again I didn't want to come across as an a$$ so lets just say the Hormagaunts spent a while in combat here thanks to the scouts 3+ saving throw 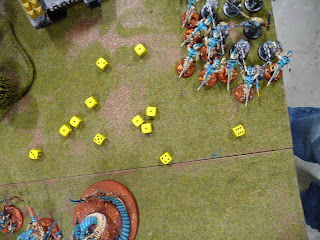 The Stealers had taken a few casualties but charged into the marine squad so they could finish them off or be safe locked in combat. 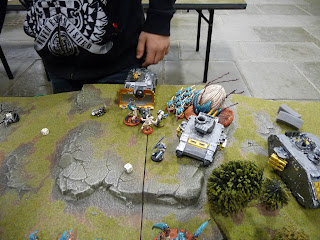 The Tervigon advanced up the hill, the Predator's turret is turned round so maybe I destroyed the twin linked las-cannons with the Spore Pod afterall, I'm not sure. 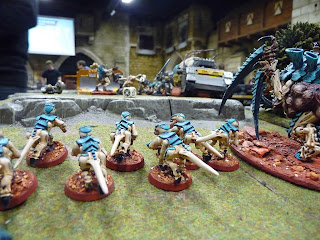 The Hormagaunts continued to maul the scouts. At this point I think one of the other guys from Southport turned up to watch, having finished his game. I think I'd had enough of my opponent guessing stats from his Codex and just posed the question 'are you sure?' with the back up of my team mate we had the true stats and things moved on apace... 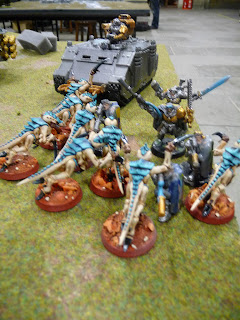 Now you know that awesome collection of 1s, welllll... not as good as this beauty rolled - nine 5s and two 4s. Although by the looks of one of the later pics it seems like it still wasn't enough to destroy this squad of scouts. Once again the Hormies fail me, I'm not sure why I bother with them! 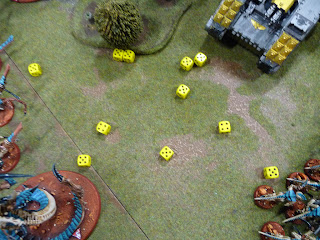 Over on the left flank the Terfigon got to grips with the Predator and ripped it's turret off, most of it's other efforts involved it caressing the tank lovingly with it's slightly floppy scything talons! You may also note the missing Vindicator, presumably the Broodlord and remaining stealer got in and tore it to pieces for a 2nd kill point. Time was ticking down I'd already had to field a number of discussions with random passers-by ranging from how the Spore Pod was made [always fun] to why we do the hobby! These pit-stops ended up costing me a little bit of time at the end, the Trygon had to choose between the Razorback and Land Raider. I was convinced the Raider was the more significant threat so it had to go. I charged - 7 auto hits - not one single one penetrated only needing 8s on the charge! In the following turn I thought I'd just switch targets to the easier Razorback. It hadn't moved, I'd get my +1 St and Initiative but that time limit came up just as I rolled to penetrate the first of 7 auto hits and no joy so we had to stop. I think the last Hormagaunt may have bitten the dust thus securing 1KP to my opponent. 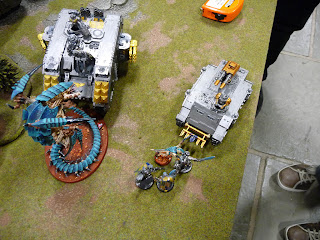 It was at this point that I had to disabuse him of the notion we had drawn. Despite a lot of victims I'd only suffered 1KP. I'd inflicted 2 but it should have been more. This was quite a weird game, from the generosity in the beginning to the cardinal sin of forgetting to bring your Codex. I really liked the guy I was playing, he was cheerful and chatty throughout but the lack of 'professionalism' tainted the match for me a little bit. I just wish those bits hadn't happened so it could have been a thoroughly enjoyable game and I really don't know how we didn't do more in the given time. I know we got into combat really quickly but it still came as a shock when time was called. I really felt my Monstrous Creatures should have done more, but it was the Stealers that carried the day with their lightning strikes and deadly claws. So I was 1 win and 1 loss at this stage and as each progressive game was worth more victory points game three would be even more valuable.
Posted by 40kaddict at 12:40