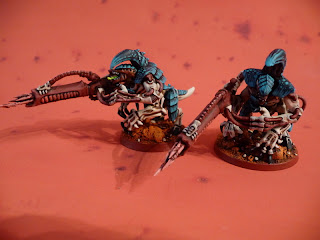 I hadn't planned to go to the local friendly neighbourhood gaming club on Tuesday night but given the excitement of new rules I thought 'what the heck?' My good buddy PeteB has seen sense and despite saying he wouldn't get into 6th and sold his Eldar has gone right back in and ploughed his ebay earnings into Grey Knights, but still has a lot of Blood Angels/Marines that he uses with his son. He was going to make it late on in the evening so I hung around for a 500pt bash, again no pics I'm afraid.

I had Tervigon, 2 Hive Guard, 10 devgaunts and a Broodlord and just 4 stealers with adrenals.
Pete had a Razorback, a squad of scouts, a tactical squad with Plasma Cannon and a stormbudgie ;)

We did the 'scouring' mission on a 4'x4' table and tried our best not to trip over too many rules. I didn't swap out any psychic powers and whatever warlord skill I got I can't remember as it wasn't worth remembering.

First blood, or shodachi - a Japanese word for the first scoring point in a kendo match which is important psychologically and in 40K is important now for victory reasons. That went to PeteB, but he got first turn and I think that'll be pretty much the norm for most matches unless night fight kicks in.

We spent a good few minutes discussing first blood as the 5+ cover save was useless and removing figures from the front was just a bit weird as you try and allocate from the 'wound pool' but that doesn't really matter as you have to keep making saves for the guy in front until he dies before the bullets/beams/flames get to the second in line. I can't see how to speed that up really, there's a 'box out' in the rules called 'fast dice' but reading it seems complicated and I'm not so sure it'll end up all that fast. Anyway, 2 stealer went down and 3 Devgaunts. 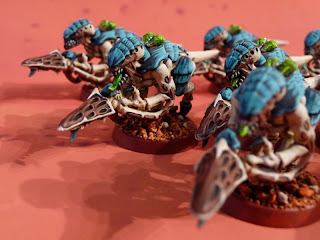 In return I spawned 12 and pooped out, the Hive Guard could only draw a bead on the scouts and I think impaled 1 or two. Meanwhile all the gaunts hid out of sight in a building. It's handy being able to pre-measure that's for sure.

The Stormbudgie came on and did some wounds on the Tervigon. In reply my Hive Guard shot at the budgie but missed, at this stage we were less about winning and more about seeing what happens so PeteB suggested they have another chance but firing at the Razorback to see what happened - 2 pens, one of which blew it up - easy. The Stealers charged the slightly stunned combat squad inside and mauled 4 of them, Adrenals no longer give +1 Initiative :(

Next  turn and PeteB decided to Hover the Budgie so he could get a better BS, he put another two wounds on the Tervigon but it was ready to strike back. Meanwhile all the gaunts headed out of the building to try and capture two objectives by conga lining. The Hive Guard targeted the budgie [the Tervigon holding ready to mop it up if they whiffed] four hits, two pen and one glance so it was wrecked. We were taken aback by how easy it was. We weren't the only ones to think it had 3 hull points but 2 is just fatal. I'm pretty sure he won't make the mistake of hovering again. Part of me thinks the inability to fire blast templates at flyers is a bit daft, I pretty much recall my World War 2 films having anti-aircraft flak out the wazoo because I understand it was a better chance to hit them with an exploding blast munition than individual projectiles. 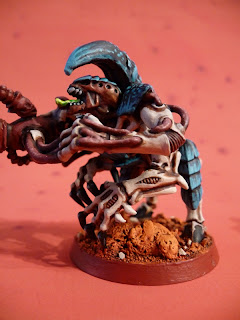 Anyway, the Tervigon cluster spined the scouts down to one man, the stealers finished off the lone marine and high tailed it behind a building out of sight of the five remaining tactical marines with the plasma cannon.

Last turn and I charged the stealers [down to the BL and one, passing their morale test just] from behind the building away from their objective to assault the tac squad just so we could see how overwatch worked, I think the Broodlord assaulted by himself, the squad failed to hit and he took out two marines in response. We didn't do any challenges as I thought it was something new too far at this stage. 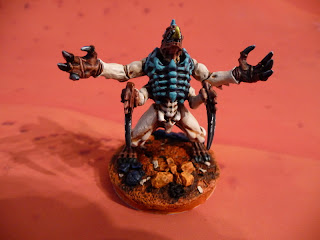 So the end result was irrelevant really, the objectives we had we knew what the value was in advance and we did some pretty odd out of game stuff just to see what would happen. There are obviously some bits I like. Wound allocation will be the difficult thing and it's even worse when in assaults. All the psychic and warlord stuff just adds a whole new level of remembering things to add to your troops. Given how many times I used to forget to use Catalyst that's one thing I'm not overly looking forward to. I fear I'll fall back on the Codex powers which may mean I miss out on some cool stuff. I think I'm going to need some other nid player as a mentor!

Overall it wasn't too bad, 500 pts was neat and we pulled the game off in about 90 minutes. However my other abiding disappointment was the objectives. Allocating values to them and suggesting they be turned face down means the purpose of getting my Hive Node markers and the practice and awards given out for objective markers is going to take a hit which I feel is a shame. Given how many times I suggested using my markers instead of my opponents coins, buttons or navel fluff at the Warhammer World tournament I'm disappointed at the shift but interested in finding an alternative solution.