Here's the first game of the 'Let There be War' Tournament at Warhammer World. This was four of the local GW's in two teams - the 'Seasiders' (Southport and Blackpool stores) Vs the 'Inlanders' (Liverpool and Preston stores). Both my Son and I were obviously on the Southport side of the 'Seasiders' both with a 1000pts of 'Nids. The three games would utilise all three mission objectives and deployments.

First match for me was a guy called Mark with his Night Lords [counts as Blood Angels]. Spearhead deployment with five objectives - one just on the upper side of the petrified forest were the Stealers infiltrated, another behind them. One in the centre of the board on the hill. He had a squad in the Razorback, a normal Dreadnought, a Librarian Dreadnought and the unit alongside the Razorback with an Assault Squad in reserve. 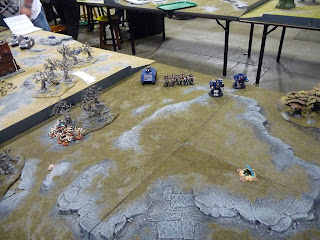 My deployment had the spore mine objective secured below the forest and the Hormagaunts heading for the building which contained and objective on the second floor. 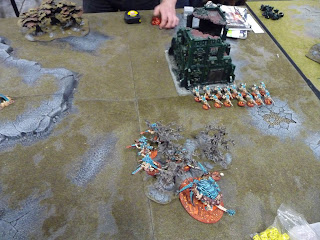 The Hormagaunts got a decent run and captured the building objective. 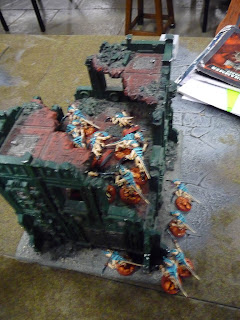 I'm not sure who got first turn but I know the Tervigon spawned 8 and got doubles so not more Termagant troops for me. The Tyranid Warriors received a lot of attention from the Razorback and Dreadnoughts. Unfortunately I wasn't able to try some wound allocation shenanigans to try and keep the unit alive as Mark didn't seem familiar with using the Primes higher toughness to take one wound from the Las-cannons instead of Instant Deathing a whole Warrior. I wasn't going to be an a$$ about it so we carried on and the unit slowly whittled down. 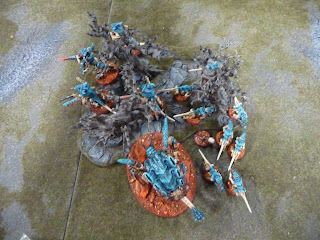 Turn 2 and the Trygon deepstruck  and deviated, he's so unreliable. Mark was very generous in that he said he was just on the board, which was nice and karma rewarded him later. He shot with his Bio-Electric pulse and killed two of the Marines. In hindsight I'm not so sure I should have put him here he may have been better in the centre of the board. 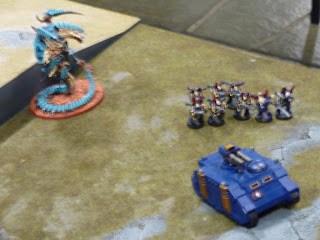 Anyway, his Assault Squad deepstruck and he too deviated. I think the scatter dice should have had them a little closer to the board edge but even if they'd have been two feet onto the next board I'd have let him have them land safely considering his generosity with the Trygon. 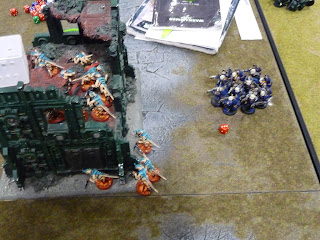 The Hormagaunts took a bit of a pounding so I sent the Termagants in to shore them up and hopefully secure the objective. As you can see the Warriors have been decimated, with only the Barbed Strangler having taken a wound and Prime left. The Strangler got a beautiful pie plate to cover the entire Assault Squad but it either deviated or failed to wound a single Marine :( 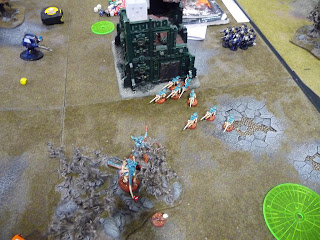 The Trygon charged into combat, I guess the Bio-Electric pulse failed to take anymore down, or I forgot to shoot, but the assault was immense... 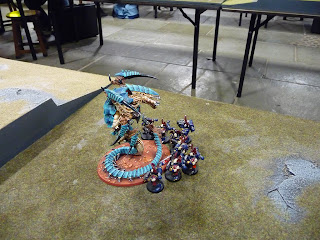 it killed a fair few, enough to cause a Leadership check which they failed and chased them down and ate the lot. That was a pretty awesome result but the consolidation didn't take me very far in my attempt to tackle the Razorback. 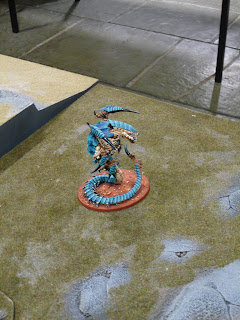 The Termagants failed to do any damage to the Assault squad, neither did the Prime. Meanwhile over on the left flank the Stealers had taken some casualties but had spread out to capture the forward objective and take cover. 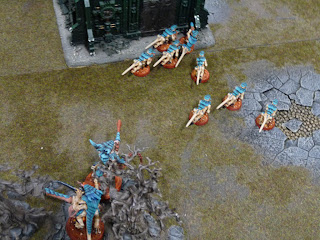 Having spawned out the Tervigon did what I thought was the sensible thing and went for the Razorback and also the central objective. As you can see the Plasma/Missile Dread was pretty much slaughtering Hormagaunts and Warriors with abandon thanks to his central location and hilltop vantage point. 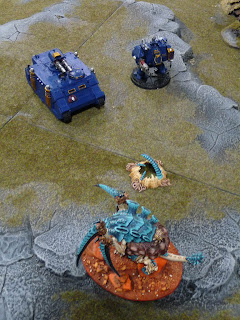 The Librarian Dread had all sorts of psychic advantages that managed to whip it about the field I think. So he slaughtered the Warrior and Prime, they weren't even strong enough to do any damage to its ceramite hide. The Termagants and Hormagaunts were roasted by hand flamers and shooting from the Plasma/Missile Dread. 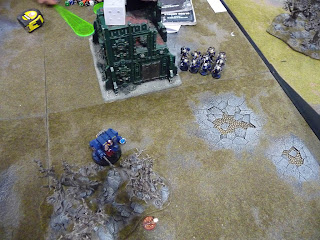 Here come the reinforcements. Again deviation and again Mark was quite generous. I'd hoped to get them back here to shoot the Assault Squad down and recapture the building objective. Again this was a bit of a mistake. 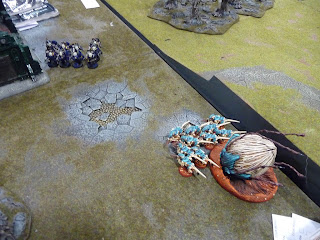 The Razorback disgorged it's troops and targeted the Tervigon who received a number of wounds. The Assault Squad then charged in and I think slaughtered it. 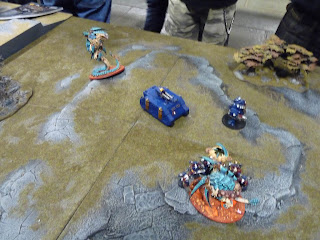 Over on the right the other Assault Squad made it into the building and captured the objective the Devgaunts may have been whittled down to nothing and over on the left the Stealers conga lined to try and capture the two objective but Mark was adamant that they could not reach both objectives. So the end result was a LOSS as he had two objectives to my one. 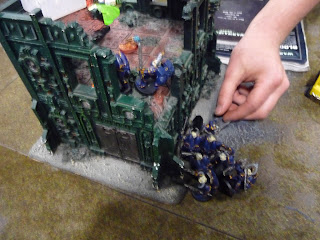 In conclusion I think I snatched defeat from the jaws of victory here. I overstretched myself. Perhaps if the Trygon had come in on the centre objective it could have cleared the Plasma/Missile Dread or the Razorback allowing the Tervigon space to capture. But then perhaps the Tactical squad it ate would have had free reign to go for the Stealer's objective. Definitely if I'd put the Spore Pod down to capture the other objective on the left I could have saved a draw at least but at the time I thought the Stealers could have got both. Either way I think I should have done better, objective scoring is this lists forté and I blew it by trying to capture all of the objectives instead sticking to two or three at the most.
Posted by 40kaddict at 12:40