I've managed to keep my hand out of this, up to a point. I think he needs me to start him going and then he'll paint for half an hour or so and then get bored. I have put some base coats on some of his figures, I base coated the Fire Prism and I've done the Yellow and Blue on the Wraithlord but he's keen to do the rest, although he isn't fussed too much about the Fire Prism so has asked me to add the washes.

However the Farseer is all his own work and I'm really impressed with this, there's something about the bits where his paint has spread too far that I think actually enhances the miniature. He's not too keen on the white face, he says it looks like a clown but I really like it and the way the red bleeds further down than it should makes it look very alien. 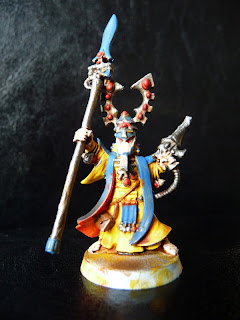 The only real issue I have is that certain areas, particularly edges are already starting to show wear and the metal is visible through the paint. I've discussed adding another set of highlights to enhance the miniature and cover up these bits and hopefully make them stay protected but I'm not sure he's that fussed. 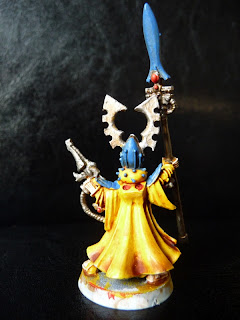 I think it's his best miniature so far, I hope he takes time to make it better. I've insisted on basing them, he helps putting the sand on the glue but by keeping the red planet basing consistent all our armies will fit together regardless of who painted the actual model. It's hard graft but there's a huge amount of satisfaction when you get through 50 figures based in one go! 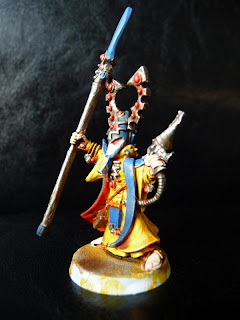