Lets catch up with the Diving Eagles. We left them with my test mini and the remaining 5 ready to be painted with highlights after all the washes had been applied by my son So, with this in his hand he went on and painted the remaining 5 miniatures and I was so impressed with the end results. Once again this is my test mini, this time in real sunlight so you can see that although the red oxide primer was tned down a bit by the washes it still adds a bit of contrast between the bodysuit and the armored plates. 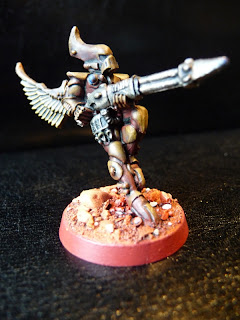 My son added the blue gem, I hoped he would spend some time on all the gemstones on his Eldar. A bit of fine detail on these spots would definitely lift all of his figures. It would be an interesting learning exercise in highlighting and the end result wouldbe greater than the effort involved, sadly I don't think he wants to do anymore to them, but he can always come back to address this if need be. 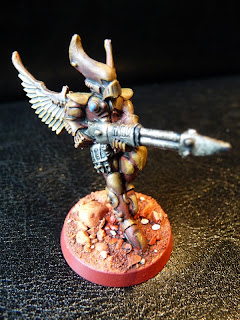 Here's the complete set, including his five painted miniatures. 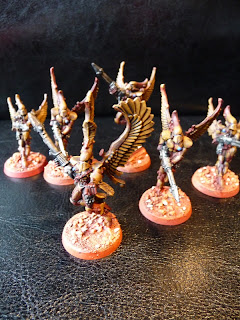 As you can see there isn't a huge difference between my test mini and his efforts. 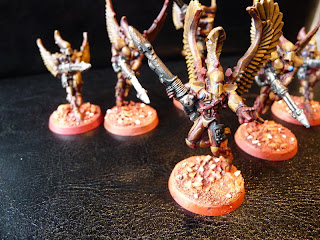 You should be able to see this more clearly when comparing mine on the left to his attempt on the right. Even his blue helmet lenses are quite neat. I'd dearly love for him to add a bit of shading, a highlight and a white spot on these jems and even on the lasguns, maybe some OSL effects on the coils there and even do the five gems on the guns muzzle. As I say I hope he comes back to them at some point. 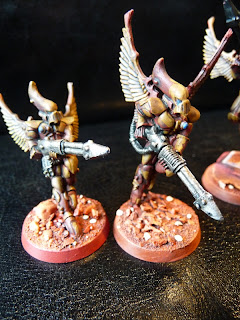 They make quite an imposing squad overall. 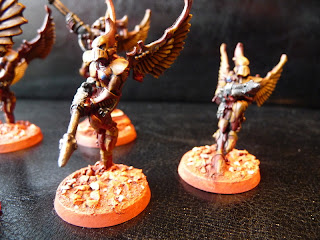 And his Exach is particularly cool too. These are definitely better painted miniatures than I was doing at his age so I'm over the moon. I hope he uses this as a benchmark for what he can do. 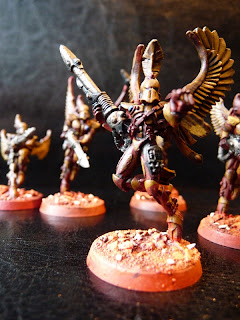