I've already mentioned my Son's wish to make his aspect warriors just that little bit different and here's where I try and come up with a paint solution for his Emperor Scorpion coloured Striking Scorpions. What I wanted was to have a black figure but with an iridescent sheen of colours showing through, much like an oil slick or starlings feathers. So I started with a Red Oxide Primer base, [I also tried a straight Matt Black one as well later on] then I did a quick drybrush of turquoise in on direction, diagonally down from the top. 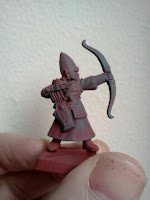 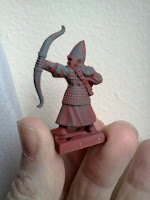 Then I did another drybrush, this time with a cheap purple acrylic diagonally up from below, thus giving a different highlight depending on which direction the light catches the model or that's the theory. 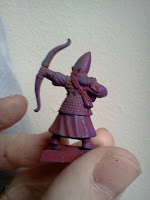 Then I washed the model heavily with Badab Black, which does allow the two highlights and the some elements of the Red Oxide to show through but unfortunately it did mute the colours an awful lot. I'm thinking a coat of gloss varnish will be used as well, and I might want to use a toothbrush dipped in white paint to just add a series of random white highlight dots like the Emperor Scorpion texture.

Here's the model highlighted on top of a Matt Black undercoat, this seems a bit richer because although it's Matt Black there is a certain reflective quality in the paint, unlike the Badab Black wash which is just flat and dulls the other colours. 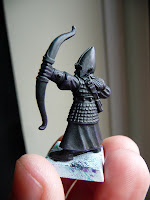 Still elements to refine, but we'll get there eventually.