Alongside the Deathwing progress I've continued on with my Space Marine Commander. His power sword has been painted in the same way as the Deathwing Captain, beautiful and scruffy! The same can be said for his cloak. There seems to be a lot of my 'old' way of painting in this - the scruffy slap-dash way I used to paint my Empire army. It got them done but was considerably removed from my wet-blending techniques I was capable of. 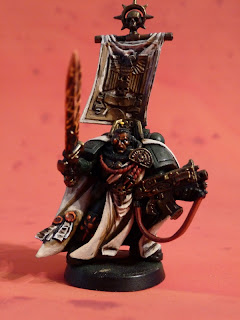 I've still to come to terms with the banner. Once again this is something I've seen executed with success. My local GW has the same AoBR Commander, painted quickly with what looks like solely Foundation paints but they seem to have picked out a wealth of detail on the banner. I've only painted the cloth and it feels like it's far from satisfactory but I must remember The Most Important Rule of Painting - it's not finished and to reserve judgement until it is. 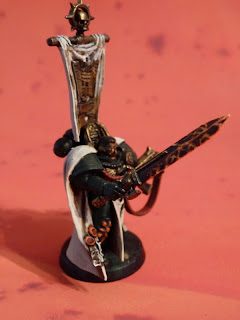 In some respects the different kind of painting on the cloak works purely because it's material, it has a totally different physical quality and texture than any of the other bits on the model. Perhaps the shadows and highlights are actually too harsh for fabric but in the 41st Millenium who knows? 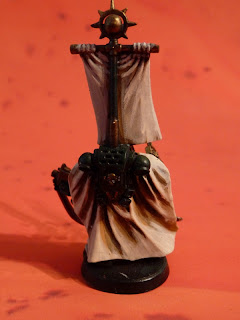 Still some little bits to do, hair, gun, banner and base at least. 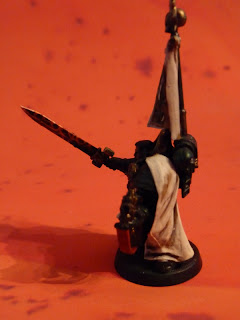 Here's a bonus tidbit. I wanted to see if I could freehand the Dark Angel chapter badge on a standard Marine shoulder pad - they're a little smaller than a Terminator shoulder, not least because of the rim surrounding the pad. As this is one of the old plastic marines his shoulder pad is smaller still than the AoBR miniatures. I managed it and it's passable. I'm not sure I want to do them all this way, although how many Marines would I actually be doing? 15, 20? Surely that's in the realms of possibility? Or, should I just opt for decals of this? Ron's just done a few posts on decals on From the Warp so if I can find a way to put them on without it screaming "HE USED DECALS" it might be worth trying. I'll be doing some decals on my son's Eldar no doubt so perhaps that will be my opportunity to reacquaint myself with the procedure and results and what results I can achieve following some of Ron's tips. 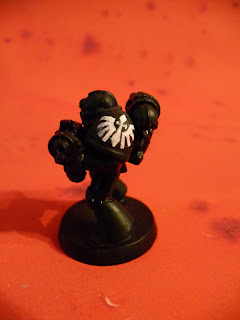