Previously on my 2nd Hive Guard conversion I was short a right rending claw arm. Once again I'm left a little lost as I kit-bashed a replacement together but now I look at it I'm not entirely sure what the components were. I think the arm was perhaps a left arm or at a very different pose as I had to split the arm at the elbow to repose the forearm in that grasping position. 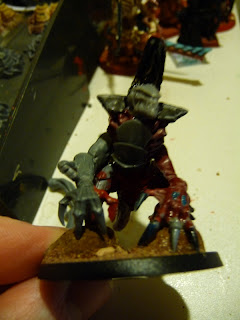 Whatever hand was at the end was removed and replaced with a Genestealer Rending claw left hand. A fraction too small and a digit short I had to cut the thumb claw off a Warrior Scything Talon to get the full four fingers. I can't quite recall what was attached to that 'stirrup' on it's forearm but I put a small ammo tube from a Spinefist in there [cos those Spinefists are seriously useful *sarcasm*]. I figures that whatever discrepancies between the left and right hands wouldn't be too noticeable because there'll be a ruddy great Impaler Cannon on top of it to get your attention, not some shonky arm transplant. 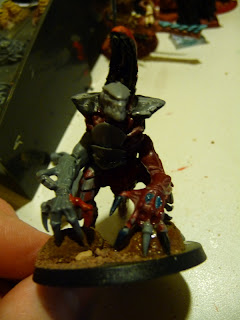 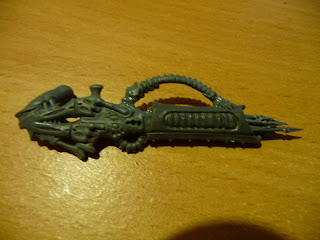 I'm not sur ewhy I took a picture of the first Hive Guard here, I think it's because I've done all the Bonewhite highlights, a small update but an important one. 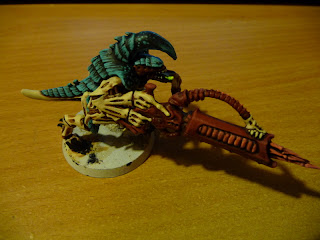 Oh, and there were 5 more Termagants in that ebay goodness that cost me £4 and these'll cost £6 alone as of next month. Funnily enough I've noticed a reduction of Tyranids available on ebay recently, maybe the market's drying up :( 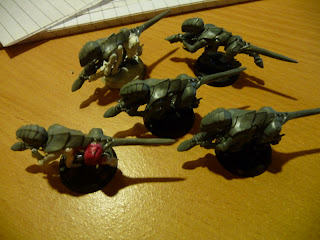