Terrain is everything - Hail the Omnissiah an old STC is found! 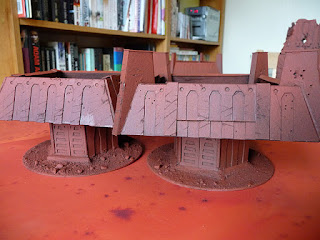 Further discoveries on Ferron Proxima have revealed another STC. Originally construction of  Hex Tower 2 were halted by the AdMech Servitor Team Epsilon as there were incomplete and contained corrupt sections of the STC. Using the latest quantum codifiers of Mathematorium Secundus, Team Epsilon were able to substitute pre-existing 'InGen pattern' code into the program matrix to complete the full STC.

These Hex Tower's are now being positioned at strategic locations throughout the Ferron Proxima heartlands. The raised observation position and defensive properties make them ideal lookout posts in the outland regions known for it's regular Xenos sightings. Given the discovery that Ferron Proxima was originally devoid of many hills and high ground, these lookout posts were another option instead of  Vulcan Plateaus due to their ease of construction. Quite often these towers are pre-fabricated and bolted onto a laid rockcrete foundation by bulk lifters. This has meant a rapid deployment of outposts across the Xenos hot spots in the outlands since it's rediscovery.