My last book review of Descent of Angels came off particularly disappointed, despite it being an OK book. Saying that my nine year old has just finished it so maybe I should ask his opinion... 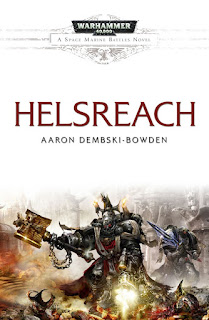 is more like it. For a start off it's got a map in it. Who doesn't love a book with a map? In actual fact it's got three full colour glossy page maps in it, which is great, but to be honest I'd have been happier with half a dozen black and white maps that showed a little more turn-by-turn action in the Battle of Helsreach. Lets face it a lot of Black Library readers are gamers and they like Battle Reports. If you're going to produce a line of books that catalogue some of the most oft discussed battles in 40k lore why not treat them in a similar fashion? That said they are nicely rendered and you can pick out some of what's going on where but it just would make more sense to have it tied in that little bit more.

Anyway, first up I have to say I love the cover [but obviously I also hate it, this is me after all]. The bold choice to use white on a number of Black Library releases really does make them stand out, particularly against the Horus Heresy novels. The picture is also well executed, which makes it one of those front cover turners, y'know where you're reading and you keep turning to the front cover to see if you're at that bit yet. Only there's one snag, Chaplain Grimaldus [the main character] has just been made Reclusiarch of the Templars and has taken the helmet of his mentor, it's a Chaplain's helmet and we all know what one of those looks like, in fact it's described in the pages:


'I’m stepping closer to the dying alien even as I speak, looking down through my skulled mask,' 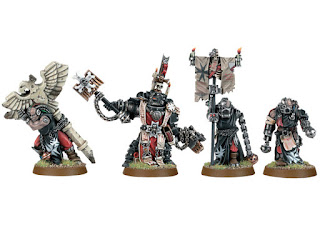 so why does it just look like standard Marine issue helmet? A minor annoyance,  it's only really going to upset us geeks, but it's mentioned more than a few times so it does grate on my nerves a little.

Other than that this is a great book. I'm thinking that these Space Marine Battle books may be a better read than the Horus Heresy ones They're not stuck with a massive story arc that can only be chipped away at and therefore not always deliver a story with a 'beginning', 'middle' and 'end'. Overall I came away with a big appreciation for the Templars. In some respects they're the 'knightly' Space Marine Chapter the Dark Angels should be. I remember a while back coming across this GW article on Black Templar Iconography and think it's be really fun just to plaster your figures with battle tokens and purity seals. If I hadn't gone down the Dark Angel route I may well have defected.

Saying all that they are pompous sods! I think it's cool that you get to see the difference between Chapters, there's some interesting exchanges between the Black Templars and Salamanders and their differences are quite interesting and you can easily understand their viewpoints, it's only really Grimaldus's own self reflection where you feel like slapping him, which I think is either his response or what he receives. But you can't help remember some times that whatever they say they are still a second founding chapter. You can't be too cocky about your purpose and ideals when you're not even a Chapter from the original Legions.

as it focuses on the Dark Angels though I'm not entirely convinced that the Veteran Scout Sergeant and cocky company Captain storyline is something I care for. Meanwhile I will continue on with Ravenor: The Omnibus.