What we have here are some more bits and bobs I got rid of, partly to fund a digital camera that's since broken but you can't have everything. My recollection of all things Imperial Guard Artillery wise may be a bit off so please forgive any mistakes. GW initially released these models/rules without any clear indication that they would be Imperial Guard only. I just saw they had good stats and that 'yep, I'll have some of them'. So you have the four mortars on the left which had awesome firrepower and the three manticores [?] on the right, I loved their little spotty targetting spheres. Additionally there are three Gorgons, I think there are the two original style when it was a mine sweeper/layer and then the revised version that was the more chunky design aesthetic Epic went down, with less detail. This version was bigger, but still not big enough in my opinion to transport the many guardsmen this claimed to do. Also my Baneblade and a stack of plastic guardsmen sprues, mainly the beasatmen figures. 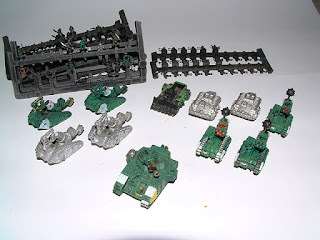 This lot was my moles and termites. If I recall correctly I also had the super heavy sized boring transport [I forget the name] but it was not in this auction and I'm not sure if I've sold it or it's still knocking around my parents attic, where I did most of my painting. Also you'll find my Squat Zepplin and these were all painted in the same colour as my original squats from way back when. look you can even see the Jack o'lantern symbol on that hatchway! I also gave away the Imperial Guard assault stand and a lone Rough Rider as a freebie, hey that's make me bid on it! 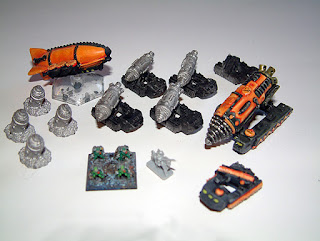 Just a little reminder of my orignal squat color scheme.
Posted by 40kaddict at 13:55