Bill the Pony and his horsey mates

What can I say? It's Bill the Pony. I always planned to have him in my Empire Army and although he's been in this Humbrol Enamel state for decades he's been in the Dettol so he can be shiny and new some day soon. 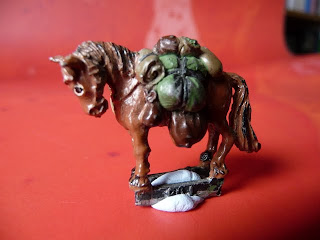 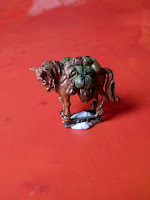 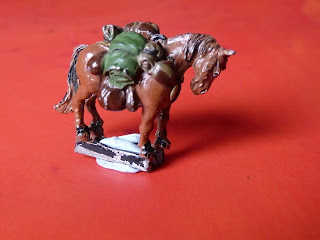 Now this fella is indeed another Lord of the Rings figure but not from the Fellowship set. I think it's a Citadel Miniature and is one of the Black Riders mounts. Not sure where the Nazgul is but of note is the mistaken use of red poster paints on the hooves and eyes, y'see they're flaming right! 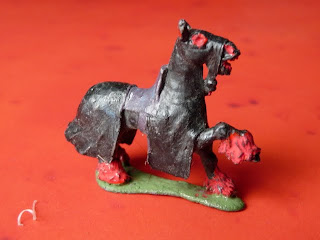 Partiuclarly mistaken in then using it on these elven chariot horses as no matter what I did the poster paint bled into the white. Successive coats still of white paint were left with an unearthly pink glow anywher in proximity to the red poster paint, which pretty much killed off all efforts to continue painting them. Except of course for ranomly starting again in black, which was sure going to solve that seepage problem. 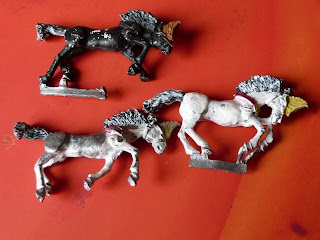 http://www.solegends.com/citmd/md04elfchariot.htm
Anyway, check out the solegends site, there's plenty of old skool stuff that I remember/still own!
Posted by 40kaddict at 12:49