Dwarves - gotta love 'em. They were my first love, well there ninjas so they were my second love, OK so I could never knock a Ranger, so third, oh I had a thing for half-orcs... erm OK I really liked dwarves back in the day. I remember one Christmas ticking off all the dwarves I wanted and handing the list to my Great Aunt. She's 91 this weekend and back then she was awesome. She couldn't do enough for me and my brother. Whereas my grandparents, who lived next door to both my aunts could often be the disciplinarians Auntie was cool, even if as a child you couldn't ascribe coolness to someone in their 60's and 70's. Regardless Auntie indulged her nephews in whatever we wanted, for my brother it was RC cars, for me it was GW. And when it came to Christmas we all sat their in her lounge and I opened this little box to  reveal all the little lead [pb] men, my grandparents intrigued up to the point where I excitedly explained what it was for them to immediately lose interest.
Thankfully I still have some of those very first figures in particular below the dwarven knight on the left of the 'chaos' dwarf standard bearer is one of those original figures and one I still love to this day. 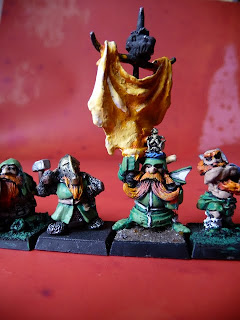 Here's the line up of the 10 figures I painted up to be an Allied contingent to my Empire army. The banner came from some Orc figures I got back in the day. There were around 50 orcs, with spears and swords from some independent figure company. The models were really poor but I was after quantity at the time. 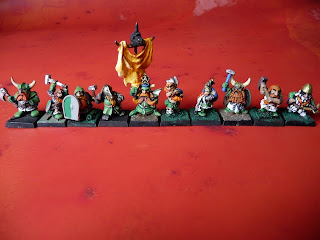 First on the left is the plastic dwarf from the Warhammer box. Elves, Dwarves, Skaven, Goblins, Orcs and Dark Elves on a sprue that was in the shape of a Warhammer [clever, see what they did there?] 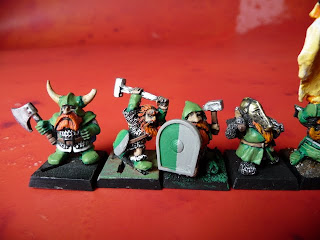 Not sure where some of these Norse Dwarves came from, I know they weren't in my Christmas box. 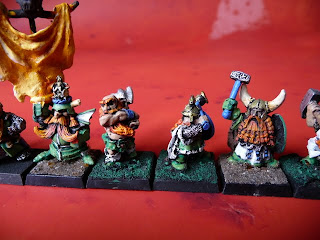 However the two on the far right definitely were. Christopher Eccelstone as a dwarf and the crossbow guy [who was my second favorite dwarf] with his nose peaking over the padded leather armour. 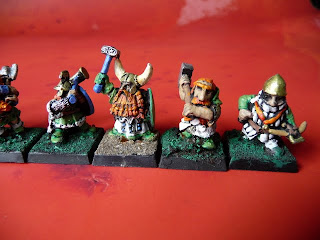 These guys didn't get finished, another 'chaos' dwarf pretending to be good, the guy in the middle with a Heroquest Orc's plastic Morningstar, a Dwarven Rat Catcher and another of my X-mas treats with kettle helm, padded leather armour and spear and shield. 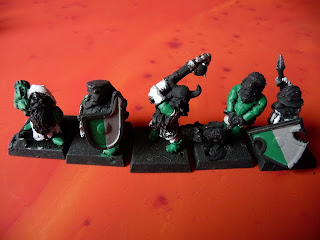 Lastly, another five. The chaos dwarf on the left is the same as the standard bearer only he still has his axe at his feet. Another X-mas original next [why the long face?], a very 'Empire' dwarf, he's practically a pirate with his hat and flamboyant dress. Next up a dwarven assassin and this guy has everything, a cool helm, dagger, shield and a mini crossbow on his back. There may even be a coil of rope over his shoulder. As a child I always wanted a a rope and grappling hook, you cannot imagine how cool this figure was in my eyes. Lastly a dwarven berserker, yeah whatever! 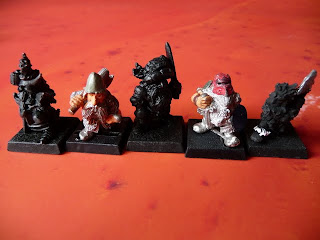