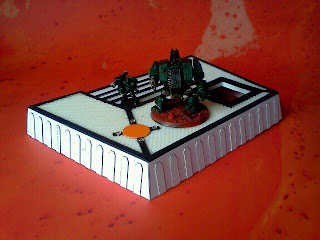 The Techno-archaeologist Avro Vulcan has unearthed a new and complete Standard Template Construct. Standard Template Construct (STC) systems were advanced computers created during the Dark Age of Technology, which are said to have contained the sum total of human technological knowledge. An STC system was possessed by every group of human colonists before the Age of Strife, allowing them to build all of the equipment necessary for survival on an untamed colony planet. It enabled the colonists to build efficient shelters, generators and transports without any technical knowledge and using almost any locally available materials. The user simply asked how to build a house or a tractor and the computer supplied all the necessary plans.

Surprisingly STCs have been found for more mundane purposes and Vulcan's discovery falls into this particular realm. although not without historical ramifications for Ferron Proxima. Vulcan has discovered the STC for a 'raised plateau', in effect a man-made hill. On paper this may seem a rather underwhelming find, why would hills need to be made? It has since been revealed that 73.4% [factor a 2.6% differential] of all of the strategic high ground, or hills, on Ferron Proxima originated as an STC. It would seem the planet was unnaturally flat and the first settlers in need of increased visibility set about building higher ground so their settlements could be protected better.

Due to the high ferrous content of the rockcrete base of these mounds, over millenia the sharp and angular cast constructions weathered and rusted leaving the more organic shaped but iconic steep sided flat topped hills that can be found all over Ferron Proxima. Further investigation has shown that the STC's function often went beyond additional height. Storage facilities and underground habitation, amongst other things were built into the structure. This news marks all potential hills an undiscovered relic from before the Age of Strife. Who knows what may rest in a long forgotten mound?

To access the full STC for the first 'Vulcan Plateau' point your cogitators here: https://drive.google.com/file/d/0B97Rk-BalgZbZDg3MzNkMTktZGVhNS00MTA4LWE4MWEtYmI5MmUwZjgwYjIx/view?resourcekey=0-uaipWLa_ruOk6Frc6mdYWg