Thanks to DoW: Dark Crusade my Son has renewed interest in GW. He's been painting his Eldar, is doing jobs round the house to earn money to buy more figures and the other day uttered the immortal words "can we have a game of 40k?" So on Saturday we dusted off Ferron Proxima and it's associated scenery and positioned them next to the new bits. It was only a 'small' force of 650ish points each, but of course that gets me little :
Belial and Terminator Squad
10 man tactical squad with missile launcher and flamer
A dreadnought
Heavy bolter Tarantula sentry gun
(18 figures - 18 wounds)
and he ended up with lots:
Tyranid Prime [LW+BS & Death Spitter]
3xTyranid Warriors - 2xDeathspitters + Barbed Strangler
5xGenestealers with Toxin Sacs
1xBroodlord, Toxin Sacs and Scything Talons
10xGargoyles
1xBiovore
1xTrygon
(22 figures - 41 wounds)
Whenever I see these lists I can't imagine any outcome where the Emperor's finest are not left in puddle of goo before being turned into gribblies. Unlike last time where I blogged the battle live I decided to just take pics and upload the results afterwards. Games take too long as it is for us I didn't want another thing to slow it down. Stupidly I didn't take notes so I'll try to engage my mental cogitator to describe what's going on, but some bits may be hazy although the highlights will no doubt be burned into my optical augmetics for eternity. I won't be posting these every other day as it'll get tedious but equally all the posts in one go would be too much so each turn will be posted each day for the remainder of the battle, oh lucky you!
Anyway here's the setup for my Son, Warriors on the left flank, Biovore in the defence tower, Gargoyles in the centre, Genestealers occupying the ruins and the Trygon on the right flank. Of course the eagle-eyed of you will have spotted the [literally] school-boy error - Synapse, but we'll get to that. 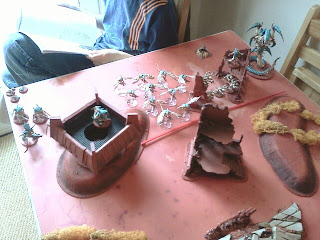 The Dark Angel Tac Squad and sentry gun on the other hand had occupied the Eduardo Stobarto Distributorum Container facility. With the Terminators, Belial and Brother Cask taking up position on the Vulcan Plateau, in the shadow of the venerated Hero of the Imperium - Matt Black. 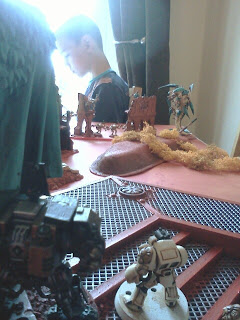 It was at this point we remembered to roll for which type of battle. There's no point to roll for type of deployment with this size of table but if there's objectives involved then I have a chance of competing, if it's annihilation I'm up the creek. Anyway, it was capture and control and my Son used his Hive Node as his strategic asset whereas I chose the Biohazard container beneath my Tarantula Sentry gun. Did I hear a cry of 'foul' there for not choosing Matt Black, Hero of the Imperium? Well lets be realistic, the Tyranids don't want a manky old statue they're much more interested in a container full of rich bio-med waste to create funky new gribblies! 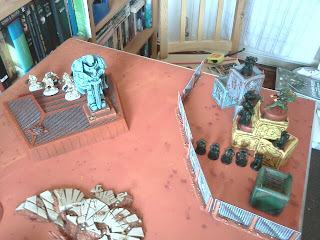 We rolled for who goes first and both got 6s, this could be good! Then rolled again and I won and didn't lose the initiative, let battle commence.

PS note how the Honored Imperium Statue fits the tower socket square on the Vulcan Plateau - skillz that is!
Posted by 40kaddict at 10:43