First up the spore mine drifted around but was still nowhere near the Tac squad observing it from their vantage points on the containers. The Tyranid Warriors advanced around the bindweed and the Biovore moved out of the building towards his objective, which he'd foolishly abandoned. 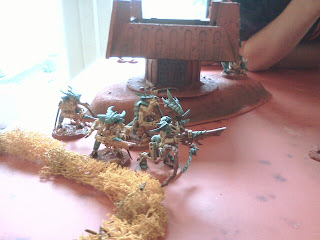 The Trygon suddenly became enraged with hunger and reverted to it's instinctual behaviour seeking out the nearest man-meat to feed on. Smashing through the ruins it slithered towards the Deathwing. Meanwhile the Genestealers under the withering gaze of their Broodlord had bigger fish to fry and went looking for the Dreadnought. 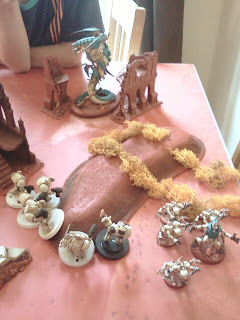 The barbed strangler finally paid dividends removing the Missile Launcher marine from his position in the containers. He'd been more than useless. I'd taken advantage of the Krak missiles to try and take out the Warriors in most turns. What with his high BS it was more likely to hit and kill a warrior than multiple frag hits that only have a 1 in 3 chance of being on target. He didn't hit once!
Meanwhile the Biovore targetted the Deathwing only for it to deviate and blow up next to the Dreadnought, but it was unable to dent it's Adamantium hide! 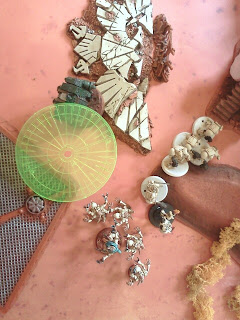 The Genestealers stormed the Dreadnought, possibly unfair to get that difficult terrain modifier, what do you think? Brother Cask pulped a Genestealer with his CCW. 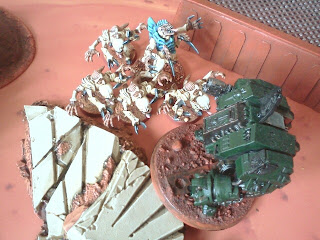 The Trygon had run and charged, barrelling into the Deathwing 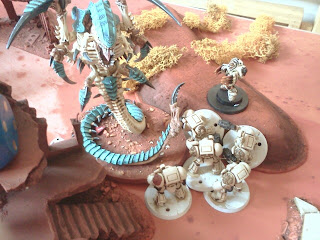 Back with the Stealers the Broodlord visited all sorts of damage and so too did it's smaller kin. A couple of stuns, an immobilised and ultimately a massive explosion ripped through the dreadnought incinerating one of the Genestealers as it exploded, I really must make a 60mm crater for his carcass. 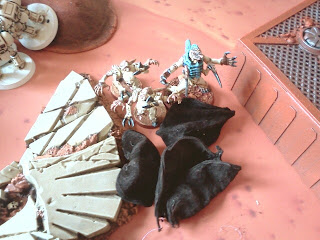 Back with the Deathwing, Belial struck out with his claws making two bloody slashes across the monstrous creatures worm like hide. The sergeant was next to face the beast... 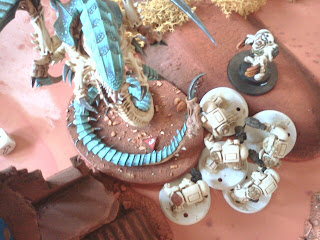 With one swipe of his power sword he added another searing wound to the beast, it's blood coating everyone. The rest of the squad braced themselves as they tried to bring their power fists to bear but the Trygon, wounded and blind with hunger slashed manically with it's sycthing talons, pinning the marines one by one and devouring them whole. The only one safe from it's predations was the Terminator Sergeant and Belial, who still suffered a glancing wound thanks to his heroic efforts to bring down the beast. 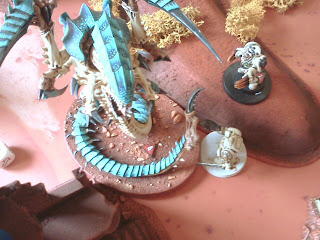 Sadly, time was called at this point and again thanks to objectives I was winning at this point. We may set this back up to finish the battle off, I don't know. I'd be hopefuly that the Deathwing could avenge their brothers in the next round and hopefully the Tac squad could finish the Genestealers with Bolter fire and cleansing flame but there's still the full squad of warriors to take down and I think they'd maul the squad into submission. Perhaps by that stage the Biovore would recapture it's objective, mine may be lost but Belial and the Sergeant would be either moving to contest or hot footed it back to the container facility to help wipe the Xenos out, maybe we'll never know, warp storms have cut off all comms links into Ferron Proxima... 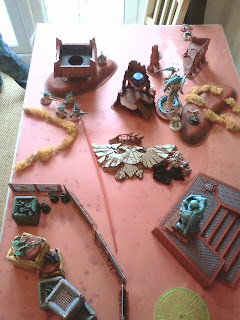 What did I learn? Those containers are cool but more than one marine on each causes wobbly model syndrome. Adjusting them so you don't have figures falling over isn't helpful when your sentry gun with a fixed 90° fire arc suddenly can't target something it did last turn 'cos you moved it! Belial's a beast but how much better if the squad had a banner: +1 Attacks and an Apothecary: Feel no Pain! Of course they were all deaded cos of Power fist Initiative one. I think a full lighning claw squad would be cool...
Posted by 40kaddict at 16:08