So this is where it all kicks off! Brother Cask advanced down the hill and just made into the difficult terrain of the smashed Aquila. The Deathwing squad also surged forwards toward the Gargoyles, the embryo of a plan was forming although I'm not sure whether it was genius or madness that was bringing life to it. Meanwhile the Tactical Squad stayed where it was. 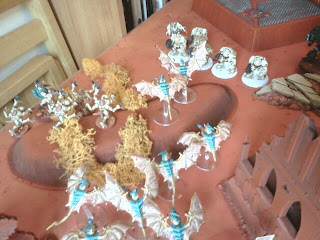 Five rounds of Storm Bolter fire, added to Brother Casks Storm Bolter and Assault Cannon whittled away the Gargoyles to three. The Tarantula may also have had some effect on that. Conveniently the ruined building had completely obscured the Trygon, no mean feat in itself so it was saved any attention.
The Deathwing charged forward and thankfully the Initiative 1 power fists didn't really become an issue. Belial slaughtered them with his lightening claws. 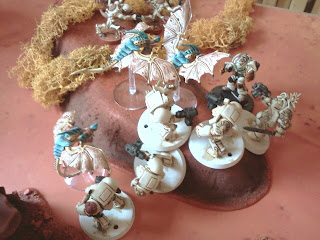 This left the squad to consolidate and I was hoping to make cover in the ruin to the bottom left. Thereby making the Initiative equal against any marauding Genestealers on the next turn. Sadly the Deathwing were pooped [despite Belial doing all the work] and just moved an inch back. Eek, here comes the pain... 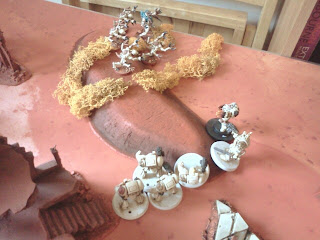