Here's an update on the 'Vent Tower', I really should think of a better name for it than that as it no longer looks 'venty', suggestions welcome. Again, night time shots P-shopped so excuse their garishness. Obviously when I get round to creating an STC for this these step-by-step pictures will be considerably more useful but bare with it for now. This is the top of the tower extension, from the inside. Unlike the base of the tower which was four separate panels this is a continuous strip - not great for efficiency savings on your foamcard but it does increase quality control. As you can see the template was spray mounted on and firepoints have been cut out. Then 45° cuts were made at each corner and junction. 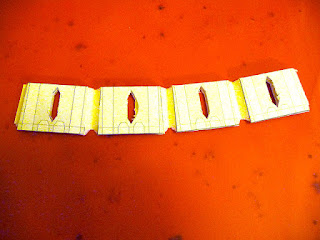 The flipside - the outside and another 45° bevelled cut was made. This will transition smoothly into the extension and because this adds additional width at the top it will in fact be the exact size as the top of the vent tower base, allowing the rooftop to be used on the extension as well as the base. Now that's MODULAR baby! 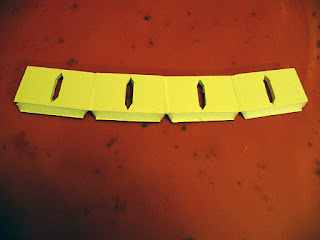 Here's the inside of the extension, again you can see the template. Of course this helps on the outside because you can see where to put the cereal box card detailing but those 45° bevelled cuts are really important so we're working from the inside out. You should be able to work out where the above top of the tower will align with the base of the black line a third of the way down. You should also be able to make out I also cut in a 5mm rebate in the foam at the top to accommodate the 'plug' on the rooftop but even the card had to be removed in construction, else the plug wouldn't fit. 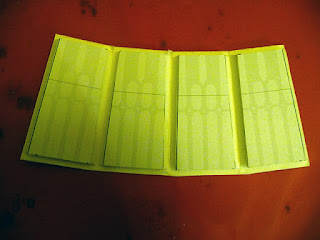 So you fold up these nets, here's where I rediscovered the awesomeness of masking tape to keep your constructions in shape whilst the PVA dries. The Extension top was glued around with the joins opposite each other so the extension couldn't split down the open edge. As you can see the rebate did it's job to gauge the height of the 'plug socket' then the card was stripped out. 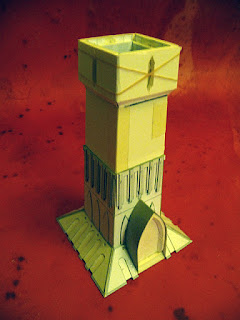 And we're left with a new and improved extension to the Vent Tower. Next stop - cereal box detailing. 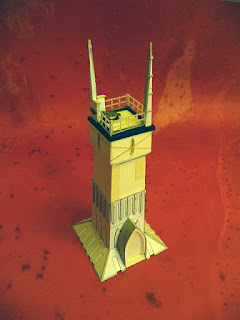