﻿Over the course of a few receipts of GW Gift Vouchers last year I picked up a couple of bikes. They're quite cheap and with the Ravenwing being a big part of the Dark Angels I thought I had to entertain the idea of having some even if they were bobbins.

So I had the two bikes and needed one more for the squad. In another post I'll show you what I got but suffice to say by the time I'd finished I needed some extra bike bases.

There was a set by dark-arts-miniatures on ebay that looked really cool with a fair bit of detail but they were too varied as a group. Here's what they were like: 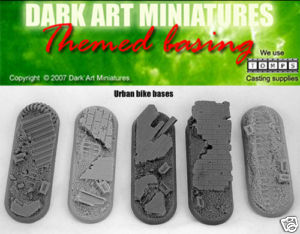 and I was really looking for some as cheap as chips, although these weren't too bad at £5.45 for the 5. So in the end I ended up with these resin bases by daemonscape1 £2.99 for 5 is a bargain and they're spot on.

It's the first resin stuff I've bought but I was aware the could be a bit 'wiffy' and boy do they stink. I've given them a quick wash in soapy water and when the bikes are ready I'll show you how I get on with basing up with them.
Anyways, thought I'd give everyone a heads up to the ebay page.
Posted by 40kaddict at 13:05