Gaming, sort of - Dawn of War

You may recall that one of the preventative measures I used to stop getting back into 40k was to sart playing Dawn of War. I've always liked computer games, who doesn't? and I realised you could easily get a similar 'fix' without the time thieving painting.modelling aspects, cost, need of another human being to play against, space constraints and a whole host of other limitations to actual physical 40k gaming. Of course some of these I've since learned to embrace again, predominantly the painting and modelling but as I've mentioned that passion is ultimately fruitless when you don't get to then do something with your efforts.

Anyway, Dawn of War has started to come back to the fore, particularly because I got Dawn of War 2 for my birthday, not the latest DoW2: Retribution, just the first installment and Chaos Rising. I also found out that my PC couldn't run it. Despite knowing better when I ordered my PC about 18 months ago I decided not get a graphics card installed. I figured the Dell option was too expensive and I wouldn't really need it for a while. Fast forward to today and I managed to get an Nvidia 7200gs [or 7300gt or mix of the two, I'm not sure] off ebay for £20, postage included. Installed it no problems and finally got DoW2 to run... vvvvveeeerrrryyyy sssslllloooowwwwllllyyyy! I ran a test and the card is a third the way between minimum and recommended. Sure if I turn the settings right down I can play but it's not as much fun as it should be.

The annoying thing is that the Mother-In-Law upgraded her PC just before me and got a  slightly lower specced PC, without the option of upgrading to Windows 7, but she did get a graphics card and even thought it's bot awesome it says it would run DoW2 well above optimal spec! I so wish I had the brass balls to swap hers for mine seeing as it'd make no difference to her web browsing. Aah, well I'll get an upgrade sometime down the line, meanwhile I'll just carry on regardless.

As to the game, I'd had a warning from my friend Pete, the one who started me off on Blood Bowl and Rogue Trader, that he was deeply disappointed in the evolution from DoW to DoW2. He missed the mass ranks of troops, the variety and the resource building. Having now experienced it I can see his point, but I am enjoying the RPG element of upgrading your character and sometimes it's nice to just have a few troops. I do think the linear nature of wandering round the map from one encounter to the next slightly less appealing than DoW, but then DoW was equally repetitive sometimes with how you build your base, sally forth, expand and assault. With the occasional counter offensive putting you on the back foot and spoiling your relentless mayhem.

On the positive side it has convinced me to look at both DoW Soulstorm and Dark Crusade to add to my DoW and Winter Assault. If I want more of the same action there's supplements available and they're cheap and my PC can run those no probs with the graphics card I currently have. Of course all this video gaming is having an impact on my hobby activities but I'm getting more reward for killing pixels at the momment than painting plastic men, c'est la vie.

I also find it odd that Tarantula Sentry guns have quite a pivotal roll in DoW2 and yet retain their fringe use in Imperial Armour but not the main Space Marine rules - shame. 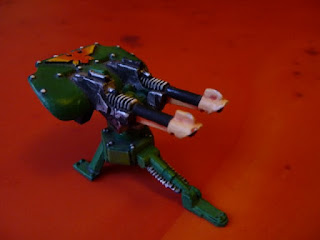 On a side note I'm off on holiday this week to Wales, not that you'll notice any difference in the blog, it's all set up to keep you entertained while I'm away. This time last year I took a load of figures and a few paints and my son and I basecoated and washed a load of them. Not so sure we'll be doing that this year but I may take the Prime just to get him done...