OK, a lot's gone on with the Vent Tower recently and I suddenly thought that despite the evolution recorded in the blog through photographs we were short in some evidence of how the actual model is wrought from the initial idea [below]. Yep we've seen that initial concept a few times but the main issue for the roof was tested 'virtually' in Illustrator. 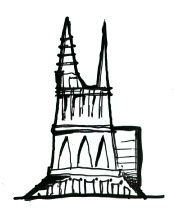 Here you can see how I was looking to solve that problem, the solutions to which I discussed the other day. As you can see the planned extension was also developed and in such a way as that I can still retain the roof section I've already constructed. Not only that, due to the 'plug and socket' module that the roof and extension use I could potentially keep creating more and more extensions as the the top and base are the same dimension! 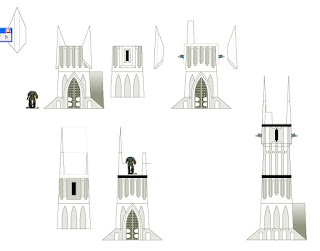 My wife did a night shift the other night so I got in a lot of work and hopefully I'll be able to bring you up-to-date on all my progress next week. One post to cover the tower, the fences, the drop pod, dreadnought and even my AoBR marines!
Posted by 40kaddict at 10:55