There was a recent post on BoLS regarding 'power gaming' and the various types of power gamer. I know I'm one but the sort that looks at the best stats and says I'll have one [or many] of them. When it came to archers in my Empire army there was only one choice Hobbits Halflings! Somehow I managed to source 10 of these fellas. I'm certain of the history of some but the remainder I've just no idea where they came from.
I'm also totally unsure of my colour scheme blue and pink?! What was I thinking, but they are kind of pretty. Anyway here's the line up... 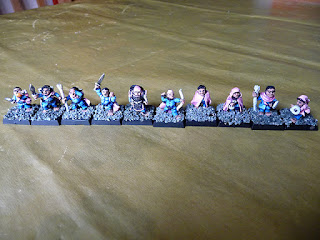 Much like the Flagellants/militia they all have a bit of character. First up is some chap stuffing his face with a rather orange chicken drumstick. The next three are Hobbits, they're from the original Citadel Miniatures Fellowship of the Ring box set, which I had. So here we have Merry, Frodo and Pippin. Sam has gone missing along with Gandalf, Legolas, Boromir, Aragorn and Gimli. Bill the pony however is in my bits box. Last of the five is the low-level hero of the unit. This is my favorite Halfling, he looks so cool in his little chainmail outfit and shield on his back. 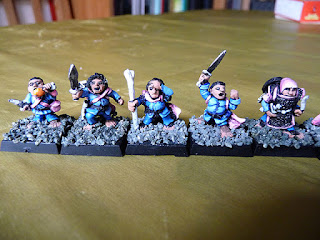 This five are less impressive, just a bunch of halflings, however the second from left is one of my earliest miniatures. You may notice he's quite tall for such a little gue, that's because he actually came with his own base. You can see the gravel is quite a mound due to the lead base that actually says halfling on it underneath. This guy came in a two pack with another halfling, balding, in a cooks apron and a little dagger﻿ though I'm not sure where he ended up. 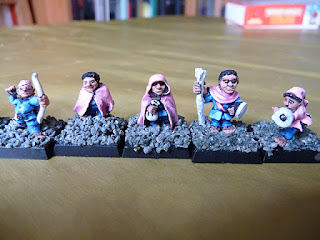 The only other thing missing from this bunch is my Champion - an Elector , Elder of the Moot! This was a Blood Bowl Halfling put into a sitting position with a lance and mounted on a Giant Scorpion! I'll fish it out for his day in the sun at some point but I think it's missing a few legs and only ever got undercoated.﻿
UPDATE - since found 'Proud Foot', the Halfling with the integral base second from the left and a number of his bretheren here:
http://www.solegends.com/citc/c11halflings.htm
Posted by 40kaddict at 12:10