So wonders never cease. My son actually played a game of 40k with his cousin and up until the frantic melee below I'd kept out of it. Somewhere along the lines his 11 Genestealers and Broodlord outflanked onto the side. They charged the Terminator squad and at this point had taken out his Terminator Armoured Chaplain [2 wounds? I thought those guys had 3] 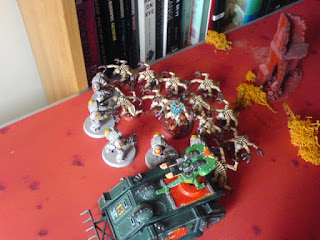 Here's a wider angle shot with a sneak peak at some of my Honoured Imperium terrain and my future containers. 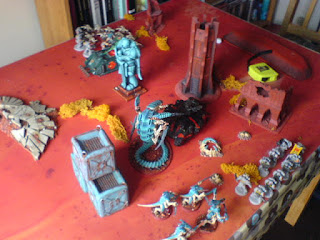 Moments afterwards the Genestealer mauled two of the Terminators [33 dice delivered two deaths!] however the squad failed their morale check and were slaughtered as they ran away. 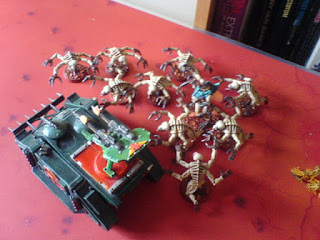 Later on the Trygon had 6 penetrating and one glancing hit on the Predator in the centre so it was destroyed also. The marines had little chance. Can't say he's learned about good sportsmanship but he's never beaten his cousin yet and perhaps it'll excite him a little more about it. Later the wife asked him again on his thoughts and he said I'm 'still sticking my nose in too much and make decisions on colours etc.' although I'm not sure what he's referring to as we haven't done any painting for at least a month! Didn't even want to be involved in the game but they kept asking my advice. Anyhoo...!
Posted by 40kaddict at 16:30