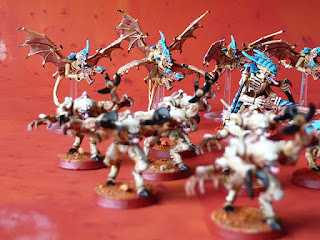 OK here's another army list from a while back. Some of it has changed but some is still relevant. First up I have to admit it isn't legal, there are 7 troops, but that's because the Alice 40k Warhammer club listmaker treats the Tervigon as a unit upgrade to the Termagant squad, not as a HQ that can now be taken as a troop. I think I later got round this by making the Ripper Swarms flying instead of tunnelling which would have achieved the same Deep Strike 'annoyatoit' antics that I see them as