Afternoon #warmongers and #warhammercommunity it's been a long time since I've done a 40k battle report - February 2019 in fact at the Last chance Open and now here's two! Having had the Tyranids trounced I had brought some Armigers, I was able to fit two Helverin and a Warglaive list. There wasn't really time for a second battle, all I wanted to do was see what the two Helverins would have done against the bikes, so started to roll the dice, without the figures on the board... Next minute we had this! 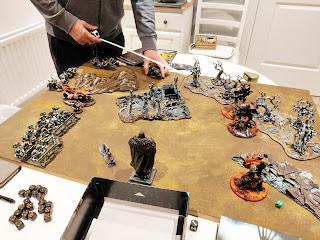 We weren't playing any objectives, it was just kill everything. By this stage there was just the Nob biker left, my Warlord Helverin was down to 1 wound thanks to the Scrapjet and bikers and falling back, which left the last biker exposed and ultimately doomed. The Scrapjet fell to my Thermal Lance but the Warglaive was down to 5 wounds too. 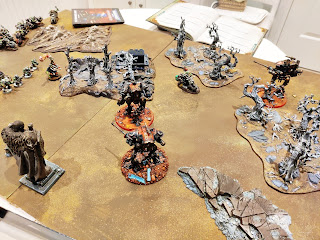 The Weirdboy and Boyz set their sights on the Warglaive and undamaged Helverin. 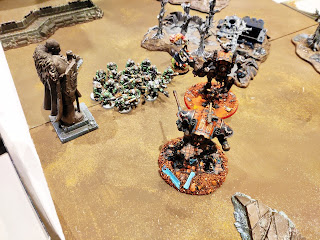 Charging in, the Warglaive couldn't stand the weight of numbers and was cut down/smited before he got a chance to swing his chain cleaver. I think he did blow up though, wounding the Weirdboy and killing some of the Boyz. The Helverin was less successful. He did amazingly well with saving throws but just could not kill the Boyz because he doesn't have a dedicated melee weapon - it's why I prefer the Warglaive. 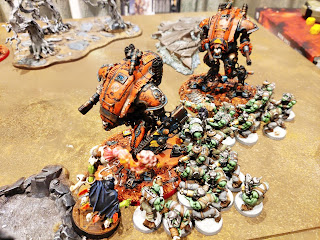 My last ditch was to charge the 1 wound Helverin into the fray but again he couldn't do very much thanks to his wounded state. I couldn't fall back to shoot as the Orks would catch me up and I didn't have the combat weapons to tip the balance 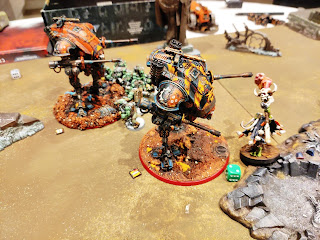 In return the Orks didn't have the strength and AP to damage me, but they had weight of numbers and we slowly chipped away at each other, with the Warlord Helverin falling to Smite. 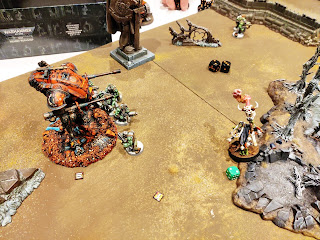 The Weirdboy somehow got removed and all that was left was 5 Boyz and the Helverin on 5 wounds. I possibly should have the advantage for Toughness and saves but I think it was 15 attacks versus my 4... 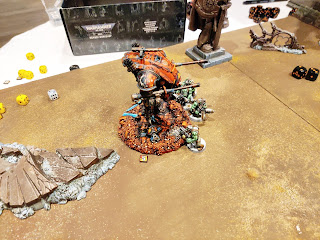 and weight of numbers will out in the end. A somewhat disappointing outcome ultimately. I had hoped he'd survive and be rewarded for his tenacity but not to be. 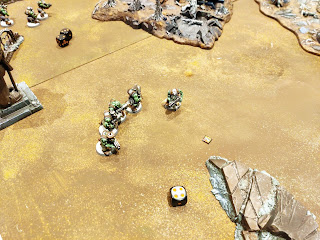 Subsequently I've had a bit more of a look at the Knight rules and thanks to them being spread over 3 books now there are additional stratagems that would have helped, although we weren't keeping too close a track on CPs. But I was also able to recoup a wound per turn, which might have made a minor difference. It's a learning experience though and failures like these force you to debrief and learn more about your army so you can do better next time. All in I think it took an hour to play this out and we'll look to have a 1,000pts next time, which I have two Knight armies I want to try out 😉 See if we can get two games in again.
Posted by 40kaddict at 12:03