Afternoon #warmongers and #warhammercommunity we've been playing #new40k in our last game we'd rolled Divide and Conquer we didn't even bother to keep track of score for game two - we were just playing fast[er]. The only variable we changed was I went first. 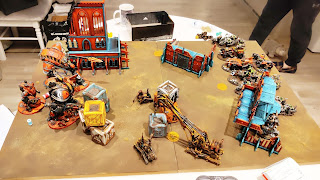 I moved up to secure an objective, my shooting was relatively successful - killing the Wartrike at least. I'm not sure how I'd split my fire but I know I debated it ad nauseum. The Preceptor's Las Impulosr is relatively short range so I think it may have taken out the Trike. There is the Capacitor Charge Stratagem that makes it Heavy 6 instead of Heavy D6  and he would have been within 18". 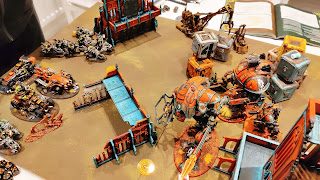 Unfortunately one vehicle down just wasn't enough with Ben calling the Waaaaaargh! This time with Ghazgkhull leading the charge. The Lancer was down to 19 wounds going into combat 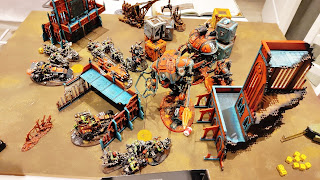 And then suffered another 14 taking it to just 5. 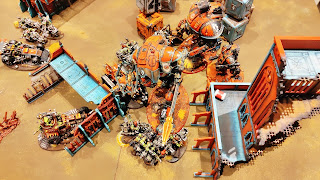 I'm not entirely sure what this roll is for - it could be Ghazgkhull's damage roll on my Preceptor, or it could have been a saving throw but as he can only take 4 wounds it wouldn't be hugely significant him passing most of them. 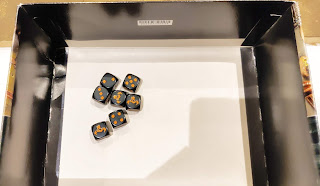 Regardless, the Knight fell and I was just left with the Lancer and the Warglaive. 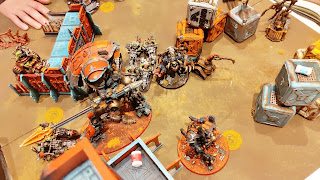 The Lancer did not last long and in an act of charity Ben suggested we finish with Ghazgkhull versus the Warglaive, based on the premise he had in fact suffered 4 wounds already. In which case the Warglaive had to cause 4 wounds in shooting and 4 in combat. 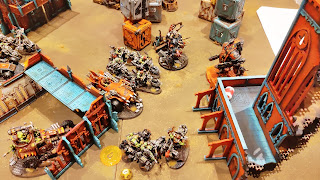 Which he just managed to do, even with Ben re-rolling his invulnerable save. Ghazgkhull was dead but the rest of the Orks butchered the Knight for its audacity killing their leader. 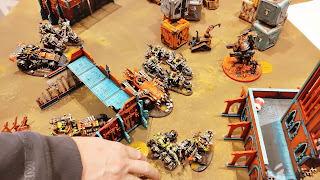 Tabled again. So much for my cockiness. We had quite the discussion afterwards about the game and the experience we've had of 9th edition so far. If you haven't gathered, it isn't particularly positive. We can't seem to pin down yet, what is making it feel so one dimensional. Is it the size of the games, the armies we've got, our inexperience [both of the rules and tactics], the discrepancy in age of Codex, the terrain setup or even the board size. It's a topic for a post on its own, when we've played a couple more games. We're planning a bigger game - 1,500pts in the hope that might change the dynamic a bit. We'll use the bigger table to do so, but I'm not sure how that will change anything as the 'no-man's' land is still the same distance.
But we're going to persevere, but it says something that with 4 wins under his belt Ben does not feel happy about the outcome. We've had fun and plenty of exclamations and drama but when that is purely on the outcome of a lucky or unlucky dice roll why do we need the figures or terrain? We need to feel like tactical choices have had a bearing on the game. So far it's just me being swamped, but maybe that's how Orks play?
Posted by 40kaddict at 12:00